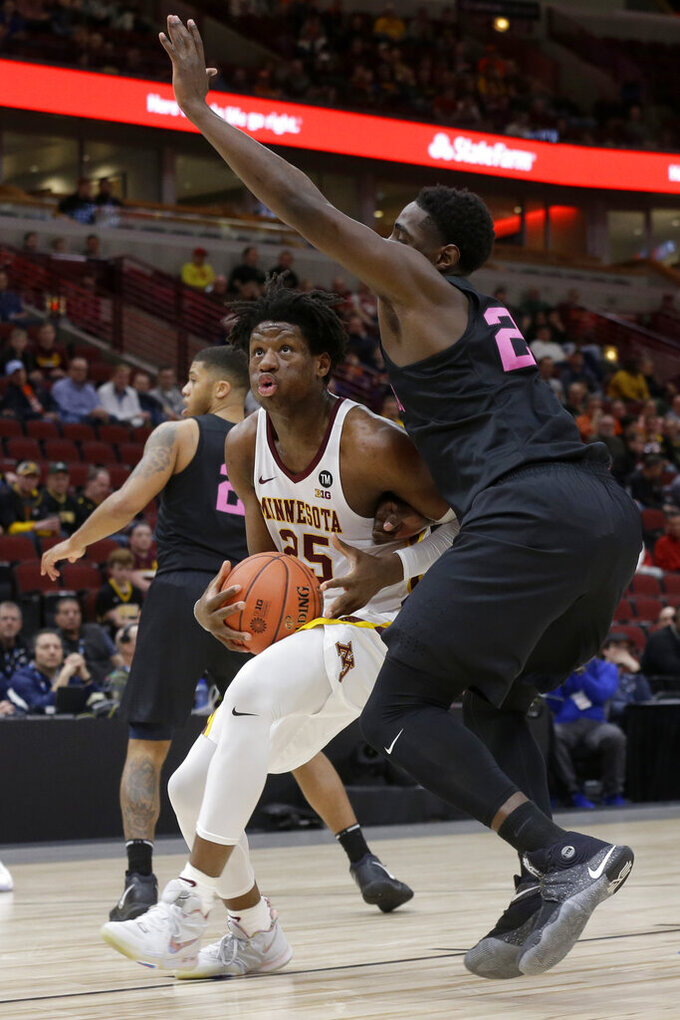 Minnesota's Eric Curry (24) drives against Penn State's Mike Watkins (24) during the first half of an NCAA college basketball game in the second round of the Big Ten Conference tournament, Thursday, March 14, 2019, in Chicago. (AP Photo/Kiichiro Sato) 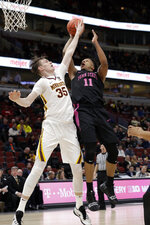 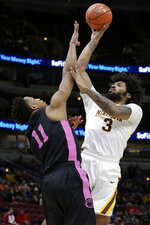 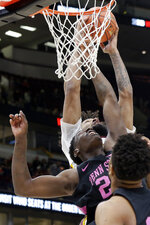 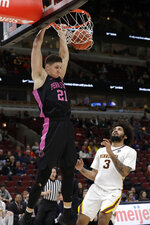 CHICAGO (AP) — Out of sync and struggling for most of the game, Amir Coffey insisted he never really found his rhythm. It was hard to tell the way he dominated at the end.

Coffey scored 10 of his 22 points in the final minute, and Minnesota rallied for a 77-72 overtime victory over Penn State in the second round of the Big Ten Tournament on Thursday night.

"I still don't feel like I got anything going," Coffey said. "They did a great job on the defensive end with ball screens and smash action so it was tough to score on them."

But when Minnesota needed him the most, he delivered in a big way.

Coffey put the Golden Gophers (20-12) on top for good 69-66 when he drove for a 3-point play, burying the free throw after he got knocked to the floor by a rotating Josh Reaves.

Lamar Stevens then missed a jumper. Coffey got bumped by Jamari Wheeler in a scramble for a loose ball, resulting in a heated exchange that led to technicals for both players and an ejection of Penn State's Mike Watkins for leaving the bench.

Coffey then made both free throws to make it 71-66 with 33 seconds left. But Penn State continued to hang in.

It was 75-69 when Myreon Jones banked in a 3 with four seconds left. But Coffey made two free throws to seal the win and set up a matchup with No. 13 Purdue on Friday.

Coffey made only 6 of 17 shots and missed all five 3-pointers. But coach Richard Pitino was confident his leading scorer would snap out of it.

Dupree McBrayer scored 18 for Minnesota. Jordan Murphy added 15 points and 14 rebounds, and the Golden Gophers knocked out one of the Big Ten's hottest teams after losing seven of 10. Pitino thinks they are "definitely" headed to the NCAA Tournament and they didn't necessarily need this win to get there.

"Truthfully, I thought we were in," he said. "But there are so many variables as we all know as it unfolds."

Stevens led Penn State (14-18) with 24 points. Watkins had 14 points and seven rebounds, but the Nittany Lions were unable to advance in the conference tournament after coming on strong over the final six weeks.

They dropped their first 10 Big Ten games and went 0-8 in January. But they turned it around, winning seven of 10 before losing this game.

"I don't know many teams that started out 0-10 and finished the way we did and get a bye (in the conference tournament)," coach Patrick Chambers said. "I was very positive with my team in there, and I'll continue to be positive.

Penn State was leading 59-51 with just under five minutes remaining in regulation when Minnesota went on an 8-0 run.

Coffey poked the ball away from Stevens and broke for a dunk to make it a two-point game before Murphy scored inside to tie it at 59-all with 1:17 to go.

Stevens scored in the post to put Penn State back on top with just under a minute left, but McBrayer quickly answered with a jumper to tie it again with 33 seconds to play.

Stevens missed a fade-away shot with nine seconds left in regulation. Murphy got the rebound, and Coffey missed a 3 off the back of the rim as time expired, sending the game to overtime.

Penn State: Though they couldn't hang onto the lead in this one, the Nittany Lions finished the season on a strong note.

Minnesota: The Gophers already were a safe bet to make the NCAA Tournament. With the win, they might have avoided a trip to Dayton for a play-in game.

Penn State: The season is likely over for the Nittany Lions.

Minnesota: The Gophers split two games with Purdue, losing on the road on Feb. 3 and winning at home last week.