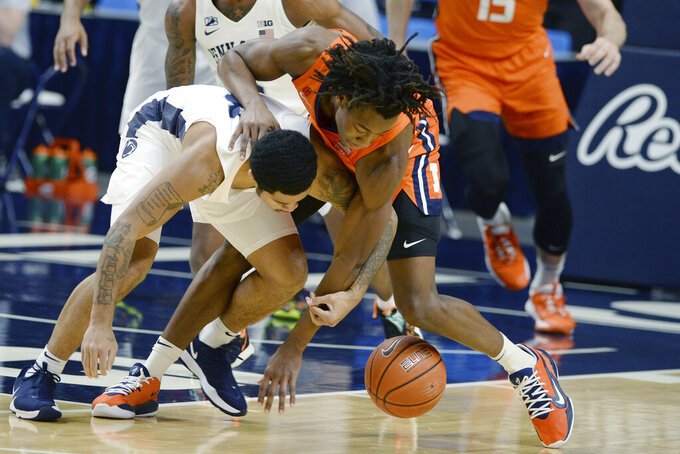 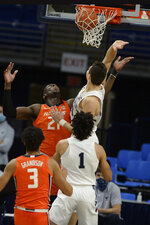 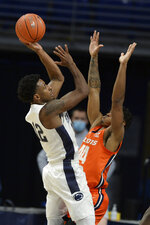 Dosunmu scored 21 of his 30 points in the second half to lead the No. 18 Fighting Illini past Penn State 98-81 on Wednesday night.

“He’s the best guard in the country,” Underwood said. “He scores it in a lot of ways. When we get Ayo locked in at the defensive end, he might be as good as I’ve coached.”

The Illini (6-3, 2-1 Big Ten) didn’t need nearly as much from Dosunmu on the defensive end after withstanding an early push from Penn State. Kofi Cockburn scored 23 points and Andre Curbelo had 15 points and eight assists for the Illini, who scored their most regulation points in a Big Ten game since 1995.

It was also their second straight win at the Bryce Jordan Center, where Penn State (3-3, 0-2) opened up a 19-4 lead over the first five minutes.

“Frustrating is a good word,” Penn State coach Jim Ferry said. “They have two stars and they both had big nights, and that can’t happen.”

While Dosunmu and Cockburn were slow to start, the Illini used the remainder of the half to claw back, tying the game at 43 at halftime. Illinois took over midway through the second half, outrebounding Penn State 24-11 after the break. Dosunmu and Cockburn combined for 28 second-half points.

They started to find their rhythm midway through the first when Dosunmu sank a pair of wide-open 3-pointers from the same spot two minutes apart. The first was his first basket of the game, and the second sparked a 15-5 run.

Cockburn capped the run and put Illinois up 40-37 with his eighth basket of the half.

The Illini took the lead for good when Dosunmu hit a pair of free throws that made it 56-54 with 13:38 left.

“All in all, we did what we had to do to get a road win and it was nice to withstand something, not cave in, not quit, stay the course and found a way to pull away,” Underwood said.

Excessive fouls doomed the Illini in their three losses. They sent opponents to the line to make 66 of 91 free throws in those games.

In five wins before Wednesday, the Illini had allowed 17.6 free throws per game on average.

“It shows the grit of this team," guard Jacob Grandison said. "So this win kind of proves that we’re unbreakable moving forward.”

Brockington was frustrated with the amount of second-chance points Penn State allowed. The Nittany Lions gave up 21 and only netted 10 of their own.

“We knew that coming in they never stopped crashing the glass,” Brockington said.

TROUBLE AT THE END

Dosunmu and Penn State’s Jamari Wheeler both picked up multiple fouls after they were involved in a scuffle with 27 seconds to go.

Illinois: Dosunmu looked unflappable and Cockburn might be the most physically imposing player in the conference. Curbelo got both of them going with quick transition plays.

Penn State: The Nittany Lions hung around and should feel good about themselves considering the size they were giving up to the Illini.