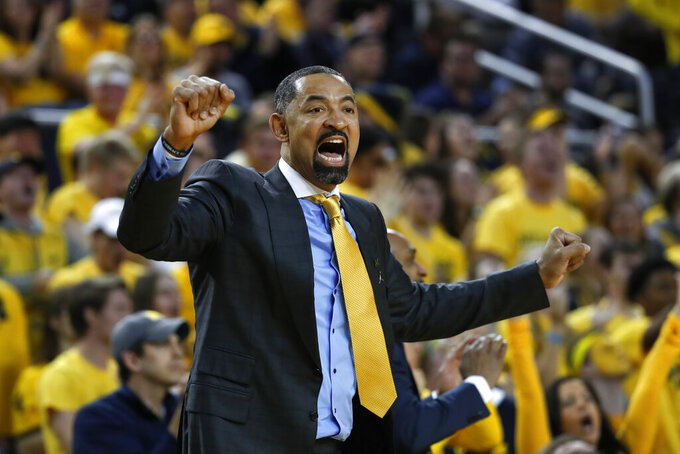 FILE - In this Saturday, Feb. 8, 2020, file photo, Michigan head coach Juwan Howard reacts to a call in the first half of an NCAA college basketball game against Michigan State, in Ann Arbor, Mich. Howard's 2021 class is rated No. 1 in the 247Sports composite. (AP Photo/Paul Sancya, File)

Juwan Howard's coaching acumen was never in doubt when he took over as Michigan's coach in 2019.

He played 19 NBA seasons, winning two titles with Miami, and spent six seasons as a Heat assistant under Erik Spoelstra.

He clearly knows the game.

The biggest question in Howard's return to his alma mater was whether he would be able to recruit at a high level to keep up in the Big Ten and nationally.

“I just go after guys that fit our culture and it's great to see those who have chosen Michigan embrace the vision we have moving forward,” Howard said. “Yes, every coach in a pandemic world at the collegiate level has pivoted in a way where you had to figure it out. Our staff, we didn't make any excuses. We had to figure it as well and see what was the best way to go out there and recruit.”

They clearly handled it well.

The first day of the early signing period was Wednesday, but Michigan won't officially announce its 2021 recruiting class until the last player in it has signed on Friday.

The six-player class is headlined by Caleb Houstan, a 6-foot-8 Canadian forward, the No. 8 overall recruit in the country. He will be joined by another five-star recruit, Moussa Diabate, a 6-10 French forward who's rated No. 20 nationally.

Villanova coach Jay Wright has been pulling in some of the nation's top recruiting classes the past few years and this year was no different, despite the changing landscape of recruiting in a pandemic.

Villanova has the No. 4 overall recruiting class, topped by Trey Patterson, a 6-7 forward from Somerset, New Jersey, rated No. 30 nationally.

“It was really bizarre. I do feel like doing zooms with players, you’re able to watch film with them," Wright said. “I felt like you developed, maybe not as good a personal relationship, but a much better understanding of their basketball aspirations and their basketball IQ. Much better. We’ll probably all do that going forward now. We just didn’t do that in the past.”

Kentucky coach John Calipari has been one of the nation's best recruiters since arriving in Lexington and has another stellar class going.

Kentucky's 2021 class, headlined by five-star forward Daimion Collins (No. 19 overall) is ranked No. 3 nationally and could get better with Calipari pursuing two other top-rated recruits.

Michigan State coach Tom Izzo has shown a knack for recruiting elite-level recruits through the years and showed Wednesday he's still got it.

Izzo's latest class is rated No. 6 nationally, with all three players ranking in the top 75 nationally.

Max Christie, a five-star 6-6 shooting guard from Rolling Meadows, Illinois, was the highest-rated of the group at No. 15 nationally. He'll be joined by 6-3 point guard Jaden Akins (No. 65) and 6-5 guard Pierre Brooks (68), ensuring Michigan State will be loaded with talent next season and beyond.

Texas Tech made a run to the 2019 national title game with a group of position-less players. Red Raiders coach Chris Beard added another in Jaylon Tyson, a 6-7 guard from Allen, Texas, who's rated No. 51 nationally.

“He deserves all of the attention he’s been getting as of late,” Beard said. “He’s a position-less player, he’s going to play all over the floor, he’ll have a chance to be an NBA guard one day with his length and athleticism, but we’re excited to get him here.”

6 minutes ago
By The Associated Press an hour ago
2 hrs ago
By Teresa M. Walker 2 hrs ago
By Eric Olson 7 hrs ago