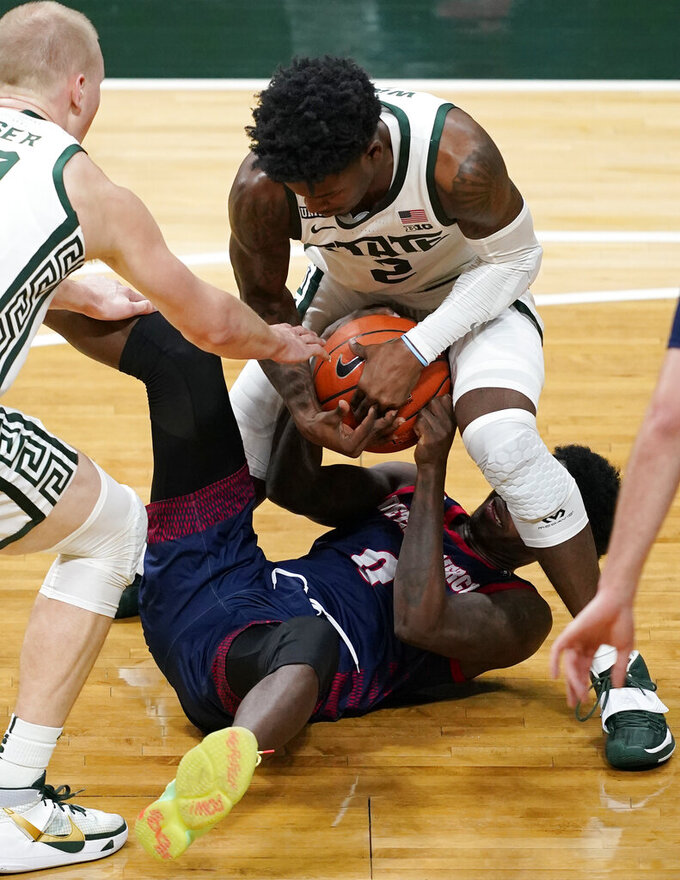 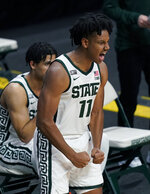 The sophomore guard scored a career-high 23 points and was strong defensively, helping the eighth-ranked Spartans overcome a flat start and avoid a huge upset with an 83-76 win over Detroit Mercy on Friday night.

“That’s the best I’ve seen him play — ever," coach Tom Izzo said. “He was in control. He made good decisions."

The Spartans (4-0) were coming off a road win over No. 6 Duke earlier this week.

“Those of you that think we’re ready for the national championship because we beat Duke, readjust your theories because we have a long way to go," Izzo said.

The Titans (0-1) led by five points midway through the second half of a closely contested game with 10 lead changes and nine ties, but came up short as two players fouled out.

Detroit Mercy was led by Antoine Davis, who scored 24 points on 10-of-26 shooting while playing for his father, the former Indiana coach.

For much of the game, Detroit Mercy gave the Spartans all they could handle at both ends of the court and on the boards.

“They did what they wanted to almost and we have to learn from that," said Michigan State's Aaron Henry, who had 12 points, 10 rebounds, six assists and three steals. “We have to play tough and play with some grit."

Detroit Mercy’s last win over a Top 10 team on the road was in 1979 at Marquette when the Titans had future NBA players, including Earl Cureton and the late Terry Duerod.

Gabe Brown scored 16 points and Joey Hauser added 10 points for the Spartans, who leaned on Watts in the second half as he scored 12 points and had all four of his assists without a turnover.

“He was dynamite, scoring and getting guys open shots," Henry said. “He was everywhere. He was guarding their best player (Davis) and scoring for us. He was huge for us. He’s growing a whole lot and the sky is the limit."

Detroit Mercy: The Horizon League team played its first game after having three canceled due to COVID-19 issues. One staff member tested positive and some players were deemed close contacts, making them unavailable to play.

“Those games we missed helped us get some extra practice with the guys," Mike Davis said.

Michigan State: Coming off the school's first win at Duke, a letdown was not surprising. It still didn't sit well with Izzo.

Spartans guard Joshua Langford warmed up for the game, but was held out as a precaution because he has a sore knee. Izzo said the decision to rest Langford was made by coaches and the team's athletic trainer, adding he will play in the next two days.

“It's not day to day that we're managing him," Izzo said.

Hauser was slowed by a knee injury.

The Titans, meanwhile, were without forward Chris Brandon due to a wrist injury.

Michigan State players on the bench chanted, “De-fense! De-fense!" during the game in an attempt to create some excitement in the fan-free Breslin Center.

Despite the lackluster win, Michigan State will likely avoid slipping in the AP Top 25.

The Spartans played six reserves, including freshman A.J. Hoggard. The guard had four points, four rebounds and two assists in 19 minutes after going scoreless in two games and not playing at Duke.

Michigan State hosts Western Michigan on Sunday night and plays No. 15 Virginia on the road Wednesday night, their fourth game in eight days.