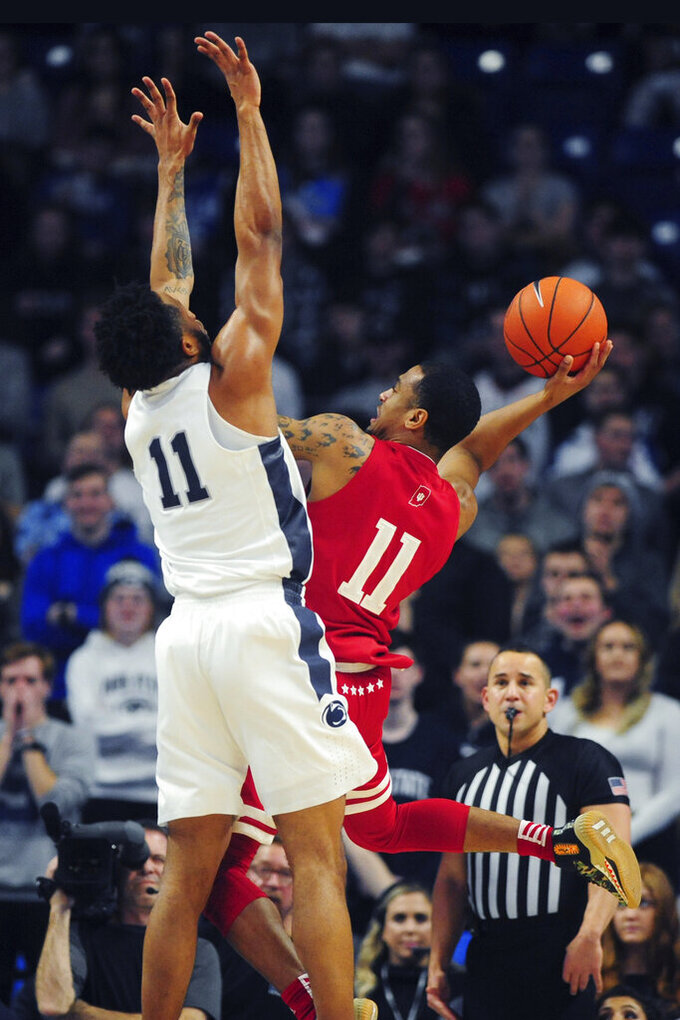 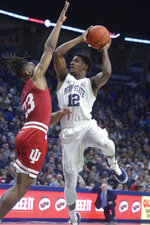 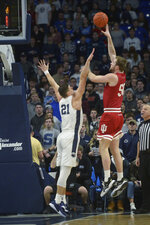 STATE COLLEGE, Pa. (AP) — A shaky offensive start won’t doom a team that can defend like Penn State has most of this season.

It’s why Pat Chambers believes his No. 24 Nittany Lions have a chance to be something special.

Lamar Stevens scored nine of his 17 points in the second half and grabbed nine rebounds to lead Penn State over Indiana 64-49 on Wednesday night.

Curtis Jones Jr. scored 12 points for the Nittany Lions (15-5, 5-4 Big Ten), who recovered from an 11-for-32 first-half shooting skid to pull away and hold Indiana to its worst offensive output of the season. Penn State notched three steals, added three blocks and forced 18 turnovers.

“The fact that they didn’t allow missing shots affect their effort on the defensive end, is something I’m going to focus on,” Chambers said. “I still think we can get a lot better. We haven’t clicked on all cylinders yet offensively and defensively.”

Trayce Jackson-Davis led Indiana with 14 points. Justin Smith scored 13 for the Hoosiers (15-6, 5-5 Big Ten) who lost their second in a row after trailing the entire second half and going pointless for long stretches.

A back-and-forth first half that that featured seven lead changes and ended in a 28-28 tie gave way to a second half that was all Penn State.

The Nittany Lions took control with a 20-7 run in which they held the Hoosiers to just a pair of field goals in just over 11 minutes. Penn State pushed its lead to as many as 20 with 3:01 to play.

Indiana players made just 9 of 28 second-half shots after going 10-for-29 in the first.

“When your offense lets you down like it did tonight, it’s going to be tough,” Indiana coach Archie Miller said. “Offensively we were bad. There’s not a whole lot to talk about except second half, we just played terrible.”

Despite their shooting struggles, the Hoosiers led most of the first half but never by more than three. The Nittany Lions created their first momentum with a 6-0 run that put them up by four with 5:53 left, but their defense was suspect in the final minute.

Davis hit an uncontested jumper to put the Hoosiers back up with 35 seconds left before Dread tipped a ball in on the other end to make it 28-28 at halftime.

But while Penn State shooters found their shots quickly in the second, the Hoosiers got colder.

With just under 15 minutes to play, Myles Dread made up for a bad 3-point miss draining a shot from the exact spot 14 seconds later. Dread, who had shot his right hand an incredulous look after his airball, turned around to find Chambers jumping and pumping his fists and the two shared an intense high five.

Stevens played a calm, steady game and earned more accolades in the process.

He led Penn State’s early second-half surge with five points and continued to climb the program’s all-time scoring list. He moved to third all-time in scoring, passing Joe Crispin when he drove the net, slipped through defenders and rolled in a layup to put Penn State up by 11 with 9:09 to play.

Stevens also joined the 800 rebound club in the game.

Indiana: The Hoosiers had been on a bit of a tear shooting the ball. They had made 49.7% of their field goals over the three games before this one.

Penn State: The Nittany Lions have regained some of the swagger they had before a three-game skid knocked them from the Top 25 earlier this month. They attracted another big crowd inside the Bryce Jordan Center and seem to relish playing stingy defense.