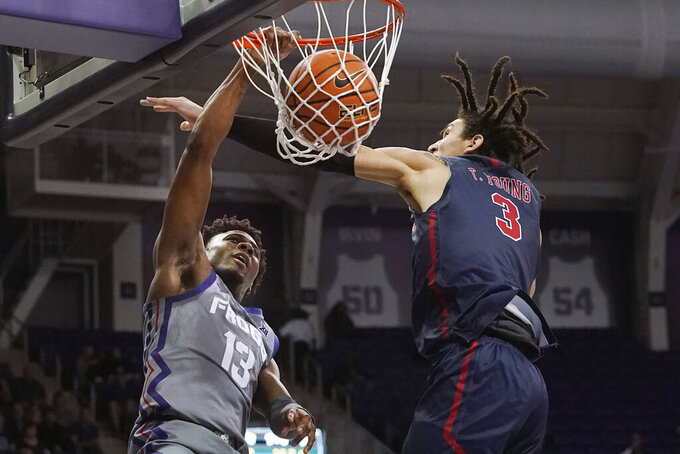 “I think the Iowa game is the only game I’ve gone into where I knew who was starting the night before,” Dixon said. “This game I had no idea who was playing, or even starting. I’ve never had anything like it.”

Coltie Young made four 3-pointers and scored 14 points for Jackson State (1-7). Romelle Mansel had eight points, 11 rebounds and two blocks. The Tigers turned it over 29 times, leading to 22 points.

Coles scored 12 points in the opening 10 minutes as TCU led 25-11 and he matched his previous career high with 15 points by halftime. Coles also had the final six points of an 8-0 run early in the second half for a 54-34 lead.

“I had a lot of confidence going into the summer,” Coles said. “With all the work that I put in, and all of us put in, with my teammates encouraging me and being there for me and always making sure I’m ready, I think that’s the most important thing I can do.”

TCU made six straight shots late in the second half — highlighted by back-to-back dunks by Baugh and Eddie Lampkin Jr. — for a 72-46 lead.

Shahada Wells added 14 points and Chuck O’Bannon Jr. scored 11 for TCU (7-1), which returned to the AP Top 25 after a two-week absence.

Jackson State: The Tigers figured to be more competitive coming off a 69-68 victory over SMU, the crosstown rival of TCU. Jackson State was down 10 six minutes into the game. Although the Tigers rallied to get within six late in the first half, they were never closer than their halftime deficit of 12 in the second half while shooting 30% for the game.

TCU: Dixon has said he's been looking for better rebounding from his team, even though the Horned Frogs had the rebounding edge in every game coming in. Sure enough, TCU was finally outrebounded, 45-39. But Dixon thought part of the reason was his team forcing 29 turnovers, limiting the opportunities for defensive boards.

Jackson State plays at Akron on Sunday before a game at No. 23 Mississippi State on Dec. 14.

TCU plays again on Saturday against SMU, which looks to rebound from that loss to Jackson State.