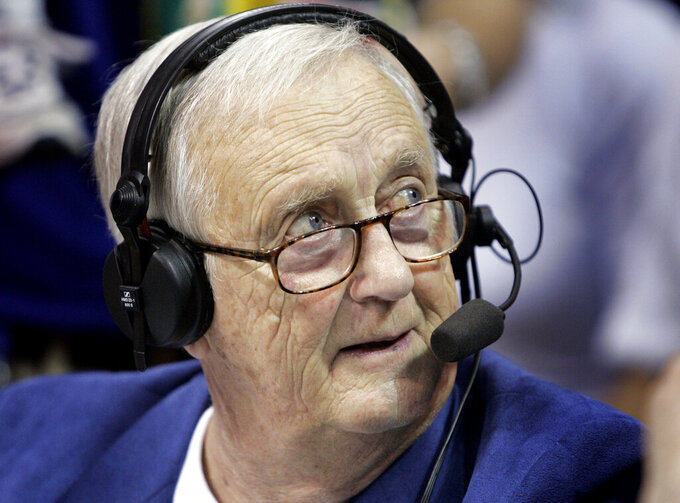 FILE - In this March 1, 2006, file photo, Kansas broadcasting legend Max Falkenstien works his pregame show before a Colorado against Kansas NCAA college basketball game in Lawrence, Kan. Falkenstien, the affable and silver-tongued “Voice of the Jayhawks” who brought Kansas football and basketball into the homes of fans for six decades, died Monday, July 29, 2019. He was 95. The school announced his death in a statement. (AP Photo/Orlin Wagner)

LAWRENCE, Kan. (AP) — Max Falkenstien, the affable and silver-tongued "Voice of the Jayhawks" who brought Kansas football and basketball into the homes of fans for six decades, died Monday. He was 95.

The school announced his death in a statement. No cause was given.

Falkenstien did his first broadcast of a Kansas basketball game during the 1946 NCAA Tournament in Kansas City, where the Jayhawks played Oklahoma A&M. He took over as the play-by-play voice the following spring, and would hold the job for 39 years before switching to the commentator's role in 1984.

He retired from Jayhawk Radio Network broadcasts after the 2005-06 basketball season.

"I've known Max since 1985, and back then, even being young in the profession, I quickly realized that Max was as big a part of the great history of KU basketball and football as the players and coaches were," Jayhawks basketball coach Bill Self said. "He was an absolute joy to be around, and he will be remembered as an absolute treasure. He was loved by everyone."

Falkenstien was a banker by trade, retiring from the Douglas County Bank in Lawrence in 1994. But his passion was broadcasting the Jayhawks, and fans across the country simply adored him.

He's the only non-player to have a jersey — No. 60 — hanging in the rafters of Allen Fieldhouse.

"He was one of a kind," former basketball coach Larry Brown, who guided the Jayhawks to the 1988 national title. "When I got the job at Kansas, coach (Dean) Smith told me about all the great people at KU, the love they had for the school and for basketball. When you talk about those great people, and everyone connected with all that tradition, Max is one of the first people you think about."

Falkenstien, whose father worked for Kansas Athletics for 33 years, was born and raised in Lawrence and enlisted in the Army Air Corps after high school. He earned a mathematics degree from Kansas in 1948, a full two years after he was on the microphone for his first basketball game.

Falkenstien also did TV play-by-play commentary for the Big Eight's basketball game of the week in the 1960s and '70s, and for three decades he hosted football and basketball coaches' shows for everyone from Pepper Rodgers and Mike Gottfried to Ted Owens and Roy Williams.

"Just the mention of his name will always make me smile," Williams said.

His last football broadcast came in 2005, the Jayhawks' win over Houston in the Fort Worth Bowl, and his final basketball broadcast came on March 17, 2006, when Bradley upset Kansas in the first round of the NCAA Tournament. Over those 60 years, Falkenstien's downhome voice broadcast games featuring the likes of Gale Sayers and John Riggins, Wilt Chamberlain and Danny Manning.

Falkenstien continued to sit courtside for home basketball games for many more years.

"His personal touch made every fan, player, coach and administrator feel like they were part of the KU family," Self said. "I hope Max realized the positive impact he had on KU and everyone connected with it. He'll be missed but his legacy will never be forgotten."

Falkenstien is survived by his wife of 70 years, Isobel. The couple had two children, Kurt and Jane, along with three grandchildren and five great grandchildren.