NCAA: Hurricanes' Dewan Hernandez must continue to sit out 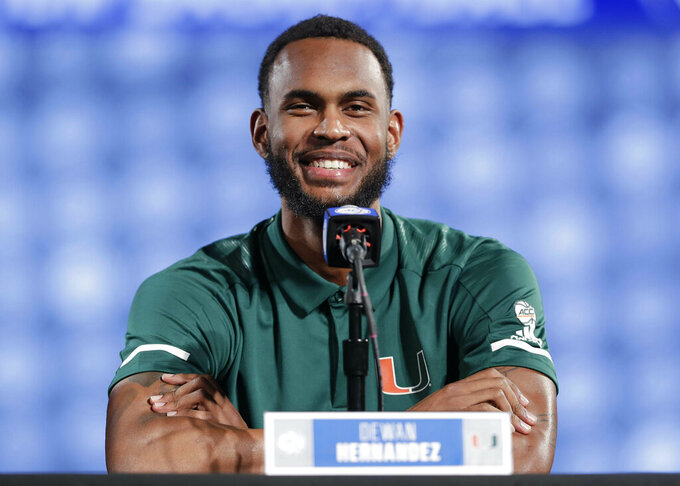 File-This Oct. 24, 2018, file photo shows Miami's Dewan Hernandez speaking to the media during a news conference at the Atlantic Coast Conference NCAA college basketball media day in Charlotte, N.C. For Miami Hurricanes junior Hernandez, the season that never started is over. The 6-foot-11 forward must sit out the remainder of this season and 40 percent of next season because of his dealings with an agent, the NCAA said Monday, Jan. 28, 2019. (AP Photo/Chuck Burton, File)

MIAMI (AP) — For Miami Hurricanes junior Dewan Hernandez, the season that never started is over.

The 6-foot-11 forward must sit out the remainder of this season and 40 percent of next season because of his dealings with an agent, the NCAA said Monday.

Hernandez responded by saying he'll turn pro this year rather than remaining at Miami to play part of the Hurricanes' 2019-20 season. Hurricanes athletic director Blake James called the ruling disappointing and unfair.

The NCAA said Hernandez agreed to receive monthly payments from the agent and accepted other benefits from him. Hernandez sat out the first 19 games of the season awaiting the ruling.

"I do not believe that the NCAA treated me fairly, and it is with a heavy heart that I have decided to withdraw from the University of Miami to prepare for the 2019 NBA draft," Hernandez said in a statement. "While I am saddened by the NCAA's decision, I look forward to starting the next chapter of my life and focusing my energy on preparing to compete at the next level."

It's uncertain whether Hernandez will be selected in the draft. He averaged 11.4 points and 6.7 rebounds as a sophomore.

James joined Hernandez in criticizing the way the NCAA handled the matter.

"Based on the totality of the facts, the university is not in agreement with the decisions and interpretations of this case, and made it well known to the NCAA staff that we have many reservations about the reliability of evidence and ultimate conclusions," James said in a statement. "Dewan was cooperative throughout this process and was transparent about what had occurred, admitting to the mistakes that he made."

The NCAA said Hernandez's violations could have resulted in permanent ineligibility, but mitigating circumstances led to the decision for lesser punishment.

Last year, following an FBI investigation, a federal jury in New York found three men guilty of fraud charges for channeling secret payment to the families of top-tier recruits to influence their choices of schools, apparel companies and agents. Hernandez was among more than a dozen players listed in a business plan to pay prospective NBA players, and the NCAA began to look at his case.

"The ruling is harsh and unacceptable," Hernandez's attorney, Jason Setchen, wrote on Twitter . "The NCAA is punishing the student-athletes for their involvement. But, who is punishing the NCAA for allowing corruption to be so rampant in college basketball that the FBI intervened?"

Earlier this month, Hurricanes coach Jim Larranaga said Hernandez deserved to be declared eligible because he unwittingly became entangled with the agent when duped by a coach.

The coach, Jordan Fair, was an assistant at Louisville before being fired after the scandal broke in 2017.

Hernandez, a Miami native who changed his name last offseason from Dewan Huell, was highly recruited before joining the Hurricanes in 2016. He considered turning pro last spring but decided to return to Miami for his junior season.

With Hernandez watching Sunday from the bench, the Hurricanes lost to Florida State and fell to 1-6 in the Atlantic Coast Conference, their worst league start in eight years under Larranaga. They are 9-10 overall, and Larranaga is in danger of his first losing season since 1997-98, his first year at George Mason.