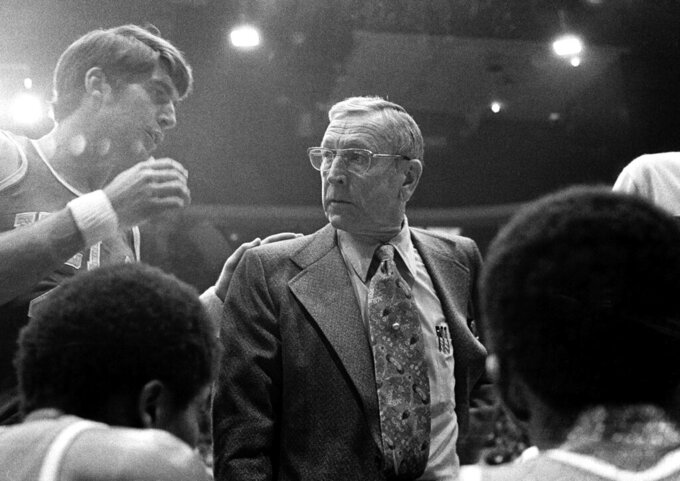 FILE - UCLA coach John Wooden listens to Greg Lee, left, during a timeout in the team's NCAA college basketball game against Iowa in January 1974 in Los Angeles. Lee, who helped UCLA to consecutive national championships in 1972 and '73 as a starting guard under Wooden, has died. He was 70. Lee died at a San Diego hospital Wednesday, Sept. 21, 2022, from an infection related to an immune disorder, the university said Thursday after being informed by his wife, Lisa. (AP Photo, File) 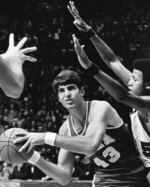 LOS ANGELES (AP) — Greg Lee, who helped UCLA to consecutive national championships in 1972 and ’73 as a starting guard under coach John Wooden, has died. He was 70.

Lee died at a San Diego hospital on Wednesday from an infection related to an immune disorder, the university said Thursday after being informed by his wife, Lisa.

Lee became a starting guard on the varsity team as a sophomore in 1971-72, alongside Bill Walton and Jamaal Wilkes. The Bruins had a 30-0 record while winning games by an average margin of over 30 points. They beat Florida State 81-76 in the national title game.

The following season, the Bruins again went 30-0 and won the national championship, 87-66 over Memphis State.

During Lee's senior year in 1973-74, UCLA's 88-game winning streak was snapped in a 71-70 loss to Notre Dame. The Bruins' run of national titles also ended at seven when they were beaten by North Carolina State 80-77 in double overtime in the NCAA Tournament semifinals.

Lee averaged 5.8 points and 1.5 rebounds in 88 games with the varsity, which compiled an 86-4 record during his three seasons.

In that era, freshmen weren't allowed to compete, so Lee, Walton and Wilkes helped UCLA's first-year team to a 20-0 record while Lee averaged 17.9 points.

Lee grew up in the Los Angeles neighborhood of Reseda. His father, Marvin, played basketball at UCLA under coach Wilbur Johns, who preceded Wooden.

After leaving UCLA, Lee played professionally in the ABA and NBA. He briefly played for the Portland Trail Blazers in 1975-76, reuniting with Walton, before playing in Germany for several seasons.

Throughout the 1970s, Lee competed on the professional beach volleyball circuit. He won 29 titles while appearing in 39 finals during his career.

After his playing days ended, Lee earned a teaching credential from UCLA. He taught math at Clairemont High in San Diego and coached varsity basketball and tennis.

Besides his wife of 48 years, Lee is survived by his son Ethan, daughter Jessamyn Feves, and his brother Jon.