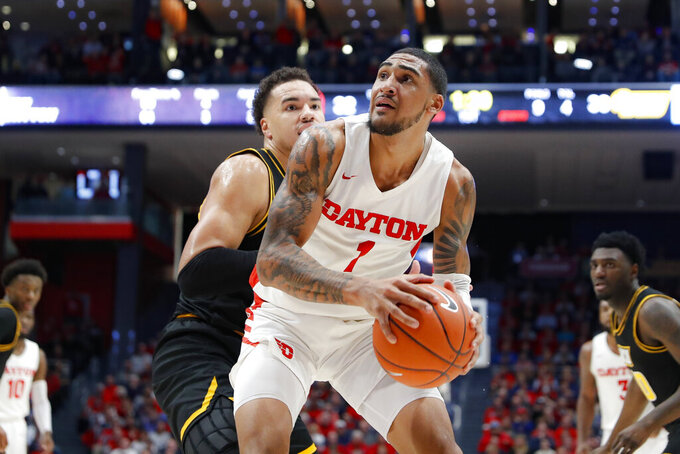 DAYTON, Ohio (AP) — As the final minute ticked down, Jalen Crutcher dribbled toward the basket and saw Obi Toppin getting set for one more alley-oop, bad ankle and all.

Pass. Catch. Dunk. The 13th-ranked Flyers did it one more time while finishing off a rival that's gotten the best of them lately.

Toppin scored 24 points on a tender ankle and led a 22-point run in the second half as Dayton beat VCU 79-65 on Tuesday night, ending the Flyers' streak of four straight losses to the Rams.

The forward who started the game in pain put his fingerprints on the biggest moments.

“He's a competitor, man,” said Trey Landers, who had 16 points. “I appreciate him so much for that. He showed up big time.”

The Flyers (15-2, 4-0 Atlantic 10) got the better of a foul-filled match-up between the league's top-scoring team and its peskiest defense, remaining unbeaten at home. Toppin had three dunks and a 3-pointer during the second-half run that broke it open.

VCU (12-5, 2-2) had won the last four against Dayton, all by five points or less, but faded after a back-and-forth opening half that included three technical fouls. De'Riante Jenkins and Nah'Shon Hyland led VCU with 16 points apiece.

Crutcher added 20 points for Dayton, which shot 50% from the field.

The Rams couldn't contain Toppin, who sprained his left ankle early in the second half of an 88-60 win over UMass on Saturday and didn't return.

Toppin moved cautiously in the opening minutes — his only shot came from behind the arc and was well off. He asserted himself out of the first media timeout, getting his first rebound and his first points on a bank shot.

“I had to go into the game not thinking about it," said Toppin, who played 33 minutes and also had nine rebounds. “At first it was bothering me, but I got into the flow of the game and the Adrenalin kicked in.”

Toppin couldn't get high enough for a dunk late in the first half, a reminder he was not full-strength. But he had a bank shot and two free throws as Dayton closed the half with an eight-point run for a 38-33 lead.

Toppin had three dunks and a 3, and Landers made a pair of 3s and a dunk as Dayton broke open a tied game and built the lead to 63-41. The Flyers were ahead by double digits the rest of the way.

The game quickly got chippy, with three technical fouls called in the first half.

VCU's Marcus Evans was called for a foul as he and Chatman went to the floor while wrestling for the ball. As players gathered, VCU's Issac Vann and Dayton's Jordy Tshimanga exchanged words and got technicals. Less than a minute later, Jenkins also got a technical.

Evans got a technical in the second half as Dayton pulled away.

“Early in the game, you could tell there was a lot of emotion on both sides,” Dayton coach Anthony Grant said. “The guys had a tough time finding a rhythm.”

VCU: The Rams were the league's preseason favorite and won their first six games but have been inconsistent, especially on offense. They had a chance to regain some of their luster by knocking off the Flyers. They led by five points in the first half but couldn't pull it off.

Dayton: The Flyers moved up to No. 13 this week, matching their highest ranking of the season. The last time they were higher in the poll was December 1967, when they were No. 6. The convincing win over VCU left them in position for another move up.

VCU came in leading the league in steals (9.6 per game) and forcing turnovers (18.6). The Flyers won despite a season-high 20 turnovers that set up 31 of the Rams' points.