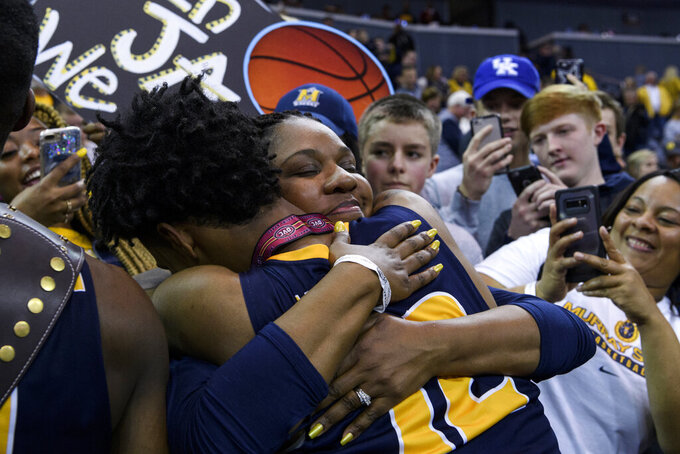 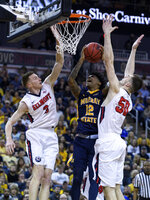 With the Racers' NCAA Tournament hopes on the line, the sophomore standout came through in the second half in front of more than 10,000 fans at Ford Center.

Morant scored 22 of his 36 points after the break and made all nine of his free throws to give Murray State a 77-65 victory over Belmont in the Ohio Valley Conference championship game.

The Racers (27-4) earned the league's automatic bid into the NCAA Tournament — the first spot to be taken this year and the team's second consecutive berth under head coach Matt McMahon.

During Friday's semifinal win over Austin Peay, Morant missed five of his 15 free throws. That stuck with the 6-foot-3 point guard.

"I was a little frustrated with myself last night ... I mean, they're free," Morant said. "Tonight, I was just locked in and just followed through with all my shots and was able to make them."

Morant, the OVC Player of the Year, played the entire 40 minutes. He was 13-for-25 shooting and added seven rebounds and three assists.

He scored eight successive points down the stretch in the second half to help withstand a rally by Belmont (26-5), which saw its 15-game winning streak end. After his assist to Tevin Brown's 3-pointer to put the Racers up by six with 56 seconds left, Darnell Cowart drew a charge on the next possession to essentially seal the win.

"We found a way to get it done in the second half," McMahon said. "I'm just so proud of our team."

Shaq Buchanan was the primary defender on Belmont sharpshooter Dylan Windler, who had 17 points but was just 1-for-7 from beyond the 3-point arc. The Bruins led 31-26 at halftime but allowed the Racers to go on a 14-2 run early in the second half that changed the complexion of the game.

Overall, there were 15 lead changes.

Windler had just two points in the first half but turned it on late. He went on a 6-0 personal run and then made a jumper to put the Bruins ahead 63-62 with 3:40 left. Morant continued to draw contact. He shot more free throws than the Bruins, who were 8-for-11 at the stripe.

It was the second matchup this season between the OVC powers. Belmont won the first, 79-66, on the road on Jan. 24.

Belmont played without 6-foot-11 center Nick Muszynski, who suffered an ankle injury in Friday's semifinal win over Austin Peay. The OVC Freshman of the Year averages 14.9 points and led the league in field-goal percentage (60.8) and blocks per game (2.2).

Murray State: The Racers are headed to the NCAA tournament for fourth time this decade.

Belmont: The Bruins are forced to wait a week until Selection Sunday to learn their fate. They will hold out hope their resume is viewed favorably by the selection committee to be an at-large team. If they land outside of the bubble, they will play in the NIT as the OVC regular-season co-champion.