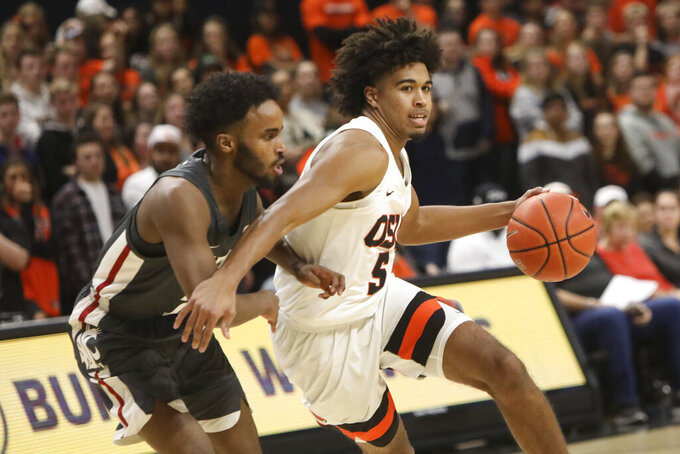 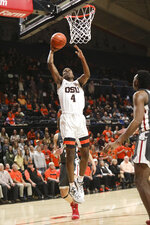 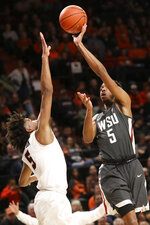 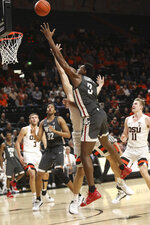 The Beavers have won the battle of the boards almost all season long, but both Arizona schools outrebounded Oregon State last week. So the squad worked on crashing the glass, said forward Tres Tinkle.

"It's nice to get back on top of that. It's something we focused on and we made it count for sure," Tinkle added.

"For a lot of minutes we played some good basketball, shared it, moved it, attacked, defended," said Oregon State coach Wayne Tinkle.

"They're competing like crazy, and that's very important, but they have a lot more growth potential," said Washington State coach Ernie Kent.

Elleby got hot and helped whittle the deficit early in the second half. A 7-0 Cougars surge, with Jervae Robinson scoring five points, trimmed the margin to 67-58 with 12:35 remaining. But that was as close as Washington State would get.

Washington State: Franks fouled out with 2:02 left on a charge. . The Cougars have won only one game in the last month.

Oregon State: Kelley needs four blocks to break the program record of 73 in a season, set by Eric Moreland in 2012-13. The junior college transfer leads the nation with 3.94 blocks per game.

Coach Tinkle was happy that his team had 23 assists on 34 field goals. The unselfish play has a ripple impact, he added. "When we're aggressive and we attack and we look to share it, that's when our numbers are better, and that's when we play with a little more urgency on the defensive end," he added.

Kent hoped that Franks was getting back to full strength after a hip injury caused him to miss four games before returning to the lineup last week. "Sometimes it takes you a game, two or three games to get your rhythm back. There are times tonight he looked like the Robert of past," Kent added.

Washington State: At Oregon on Sunday.