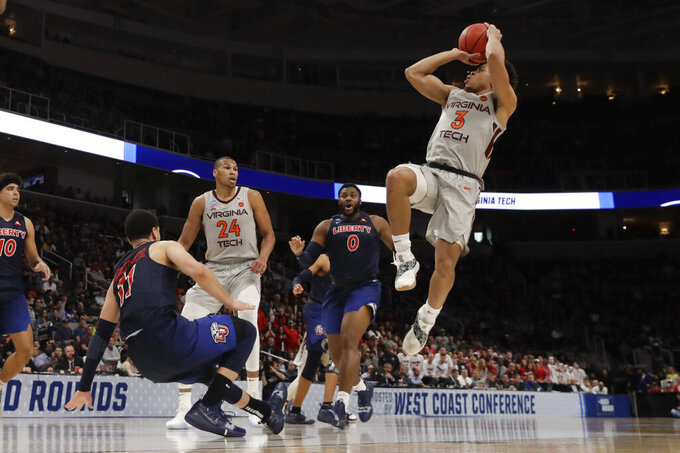 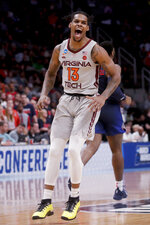 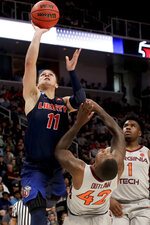 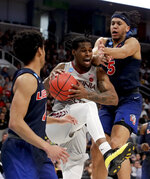 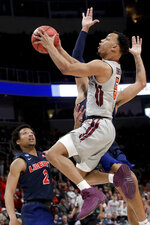 SAN JOSE, Calif. (AP) — The final seconds ticked down and the celebration began for Virginia Tech. The more than half-century wait for a return to the Sweet 16 was finally over.

The fourth-seeded Hokies advanced to the second weekend of the NCAA Tournament for just the second time in school history, knocking off 12th-seeded Liberty 67-58 in the second round of the East Region on Sunday.

"This moment is so big for us, so big for everybody in this program," forward Kerry Blackshear Jr. said. "It's been a long journey. So I'm glad to be here."

Blackshear had 19 points and nine rebounds to lead Virginia Tech (25-8), which clamped down on defense in the second half to earn the win and a rematch with top-seeded Duke next week. The only other time the Hokies made it this far in the NCAAs came way back in 1967 when they won two games before losing to Dayton in the regional final of a 23-team tournament.

Darius McGhee scored 15 points to lead Liberty (29-7), which won its first tournament game ever Friday against Mississippi State. Caleb Homesley was held to eight points on 3-for-11 shooting after scoring 30 points to fuel the first-round upset.

"They just executed a little bit better than we did," Homesley said. "We executed plays but didn't hit shots. When they executed plays, they hit the shots."

Liberty looked to build on that breakthrough win and a 9-0 run early in the second half put the Flames up by five. The Hokies tightened up defensively after that and Liberty missed 11 of 12 shots from the field — with six of the misses from 3-point range. Liberty also committed four turnovers and trailed 56-49 after a layup by Nickel Alexander-Walker with about four minutes to go that capped an 11-0 run.

After Liberty made one free throw, Hill converted a three-point play off an inbound pass to extend the lead to nine points and the Hokies held on from there.

"I'm just excited to be able to play again with these guys," Hill said. "I'm a senior and just all the work that has been put into the program just seems to be pouring out."

Liberty started fast with McGhee hitting four 3-pointers in the first half — twice as many as he had in the previous seven games combined. The Flames built an eight-point lead in the half before the Hokies cut it to 32-29 at the break on a 3-pointer in the final seconds by Hill.

Liberty: Despite the loss, the season was a success for the Flames. They set a school-record for wins, won the Atlantic Sun tournament in their first year in the conference and won the first tournament game in school history after two losses to No. 1 seeds and another in a play-in game.

Virginia Tech: The Hokies made it through the first weekend of the tournament without a big contribution from star point guard Justin Robinson. The school's all-time assists leader returned this week after missing 12 games with a foot injury. He looked a bit rusty in the first game but fared better on Sunday. He shot 5-for-9 and had four assists in 29 minutes, including a key basket late after Liberty had cut the deficit to five points.

After making seven 3-pointers in the first half, the Flames went cold. They shot just 3 for 13 from long range and just 27 percent overall in the final 20 minutes.

"The first half they shot the ball about as good as you can. We had to make it a little bit tougher for them," Hokies forward Ty Outlaw said. "They are a great team, they earned their spot here just like everybody else. We didn't expect it to be easy. We just knew we had to step it up a little bit."

Virginia Tech advanced to play No. 1 overall seed Duke in a rematch on Friday in Washington, D.C. The Hokies beat the Blue Devils 77-72 at home on Feb. 26 in a game Duke star freshman Zion Williamson and Robinson both missed with injuries.