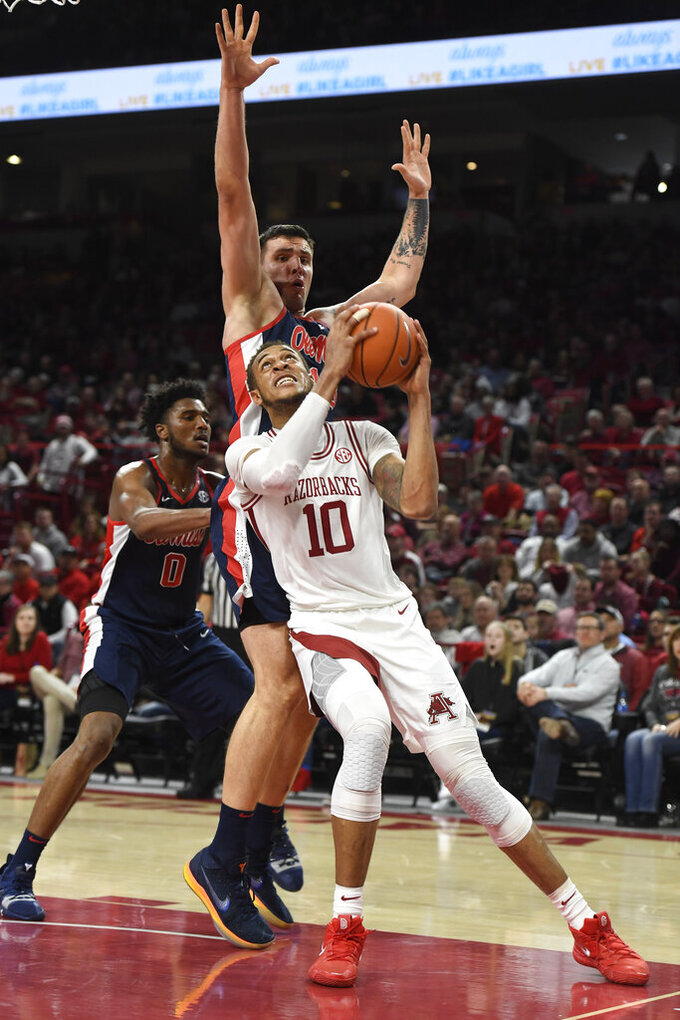 Arkansas forward Daniel Gafford (10) tries to get past Mississippi defender Dominik Olejniczak (13) during the first half of an NCAA college basketball game, Saturday, March 2, 2019 in Fayetteville, Ark. (AP Photo/Michael Woods) 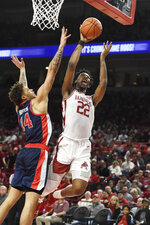 FAYETTEVILLE, Ark. (AP) — When Arkansas chose this date to honor the 25th anniversary of its 1994 national championship team, using that as motivation to end a six-game losing streak was not part of the celebration planning.

But that is where the Razorbacks were Saturday, and it took every imaginable ploy for Arkansas pull out a 74-73 win over Mississippi.

The Razorbacks wore throwback uniforms, coach Mike Anderson wore an old-school red blazer, and it was a game-clinching defensive play at the end that was so reminiscent of the "40 Minutes of Hell" that Hall of Fame coach Nolan Richardson employed so successfully that made the difference.

"This was big to have them here today," Arkansas sophomore Daniel Gafford said of the championship team. "Those guys had energy for us, the crowd had energy for us. The crowd got loud at the end. With all that, you couldn't help but to win."

Anderson said several members of the championship squad addressed the team before the game, telling the players "we played here 25 years ago, but we are living through you now." Anderson said that message resonated with his squad.

Jalen Harris delivered a clutch performance for Arkansas with 10 points and nine assists. He sliced through the lane for a layup with 5.9 seconds left to give Arkansas its final lead. After each team called a timeout, the Razorbacks (15-14, 6-10 SEC), forced an Ole Miss turnover in the backcourt as Gabe Osabuohien came up with a loose ball as time ran out. Pressure defense was a trademark of the Arkansas teams under Richardson and Anderson, who was Richardson's longtime assistant coach.

Harris said his game-winning play was actually designed for Gafford to get the ball.

"Once I saw that Daniel wasn't open, I dribbled over to Isaiah (Joe), but he rolled his foot," Harris said. "When he did that, his man stopped playing and it opened up the lane. I just went with my instinct and put the ball in the air and it went in."

Ole Miss (19-10, 9-7 SEC) hammered Arkansas 84-67 on Jan. 19, and led by eight points several times in the first half. But the Razorbacks were able to stay in the game with Mason Jones delivering a solid game off the bench. Jones scored a game-high 22 points and was 6 of 8 on 3-pointers. His 3-pointer with 32 seconds left in the first half pulled Arkansas within 35-34, and the game was close the rest of the way with 21 lead changes.

Breein Tyree, who led Ole Miss with 20 points, scored his team's final eight points of the game. His 3-pointer with 1:07 left gave the Rebels a 73-70 lead. Ole Miss did not score again.

After Harris found Gafford inside for a dunk to pull Arkansas within 73-72, Ole Miss turned the ball over when Jones reached in to knock the ball loose and Gafford dove on the floor to force a held-ball with Arkansas gaining possession with 18 seconds left, setting up Harris for the game-winner.

The loss was huge for Ole Miss, coming off a 73-71 loss to Tennessee. The Rebels are in the mix for a No. 4 seed in the SEC tournament. It doesn't get any easier this week as Ole Miss hosts Kentucky on Tuesday.

"Yeah, I cussed myself out," Gafford said of his mindset after going 1 of 6 at the free-throw line before making two big free throws with 1:29 left to pull Arkansas within 71-70. "It was real aggravating. I work on free throws, but as much as I shoot them in the game, they don't fall for me, so I just have to have short-term memory."

Arkansas freshman Isaiah Joe hit his 100th 3-pointer of the season and is two shy of the school record of 102. . Ole Miss has lost three of its last four games, all by fewer than five points. . Bruce Stevens, Devontae Shuler and Terence Davis all had 12 points for Ole Miss.

Mississippi: The Rebels will host Kentucky on Tuesday.

Arkansas: The Razorbacks are at Vanderbilt on Wednesday.