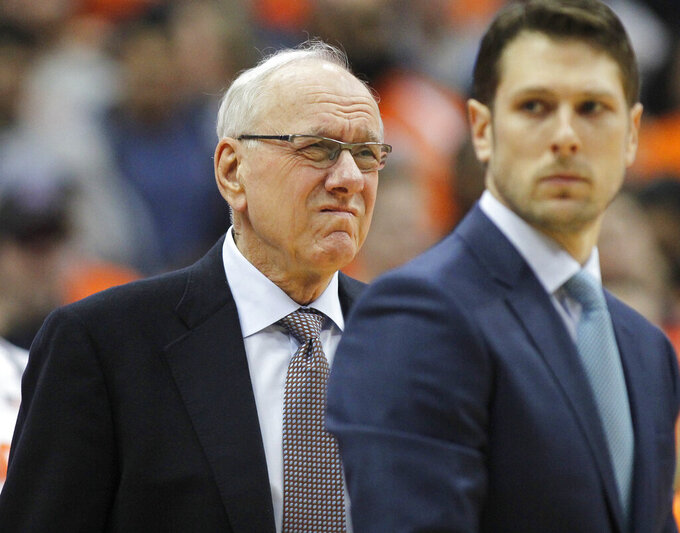 Syracuse coach Jim Boeheim waits for the team's NCAA college basketball game against Duke in Syracuse, N.Y., Saturday, Feb. 23, 2019. Three days after he accidentally hit and killed a pedestrian, Boeheim returned to the bench to loud applause prior to the Orange’s game against top-ranked Duke. (AP Photo/Nick Lisi)

SYRACUSE, N.Y. (AP) — Three days after he hit and killed a pedestrian, Syracuse coach Jim Boeheim returned to the bench Saturday night to a loud applause from a record Carrier Dome crowd prior to the Orange's game against top-ranked Duke.

Boeheim, who had not appeared in public since Wednesday night, made his way to center court, head down, and acknowledged the crowd with a brief wave before giving Duke coach Mike Krzyzewski a heartfelt hug.

In his 43rd season as head coach at his alma mater, Boeheim had addressed the team on Thursday but did not take part in practice. Although he returned for practice on Friday, he had not appeared in public until he made his way into the Carrier Dome.

A moment of silence was observed before the opening tip for Jimenez and his family.

Police say Jimenez was a passenger in a car that apparently skidded out of control on a patch of ice and hit a guardrail. Police say Jimenez was trying to get to safety when he was struck by Boeheim's SUV. Boeheim had swerved to avoid the disabled car, which was resting perpendicular across two lanes.

Jimenez was taken to a hospital, where he was pronounced dead. Another man in the car suffered minor injuries.

Police say Boeheim has cooperated and sobriety tests administered to Boeheim and the unidentified driver of the other vehicle were negative for any signs of impairment. No tickets have been issued and the investigation is continuing.