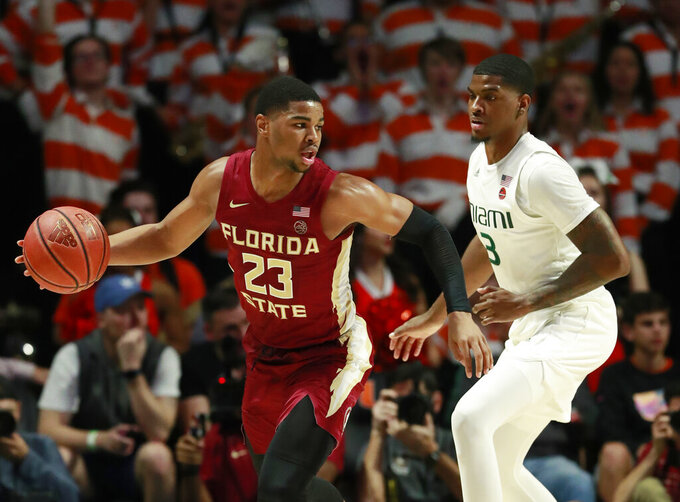 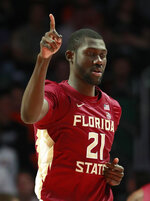 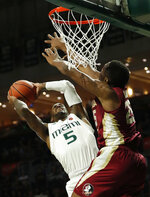 CORAL GABLES, Fla. (AP) — Florida State beat Miami from beyond the arc — and from everywhere else.

The Seminoles made a season-high 12 3-pointers and shot a season-best 56 percent overall to beat the outmanned Hurricanes 78-66 Sunday night.

The taller Seminoles also had a 34-26 rebounding advantage, and their smothering defense fueled a 15-0 run during a three-minute stretch late in the first half.

"This is the first game that we've had everybody healthy the entire year," coach Leonard Hamilton said. "Our team has pretty good potential. The good thing about us is we're finding a way to have some measure of success while we're still growing and developing."

Among the Seminoles who have battled injuries is Walker, who shot 8 for 38 in his previous six games. Against Miami he went 7 for 10, missed only one 3-pointer and contributed five assists.

"I felt myself in the zone," Walker said. "I knew it was just a matter of time."

Meanwhile, Miami's dynamic 5-foot-7 Chris Lykes missed all 12 shots and scored only one point. It was the second consecutive bad game for Lykes, who was averaging 19.3 points in league play.

"I can't explain it," coach Jim Larranaga said. "We need him to play well."

The Hurricanes (9-10, 1-6) are off to their worst league start in eight seasons under Larranaga, who is in danger of his first losing season since 1997-98, his first year at George Mason.

"It's a very unforgiving league," he said.

As the Seminoles know all too well. They started 12-1 but fell out of the Top 25 a week ago after losing four of their first five conference games.

Among those healthy again is Phil Cofer, their leading scorer last season. He returned after missing two games because of a foot injury and scored four points in 18 minutes.

"His energy flows through us," Walker said. "It's crazy what he brings."

"We had a hard time defending their big guys," Larranaga said. "We tried to help out inside and take away some of the opportunities in the paint, and it opened it up for the 3-point shot. They made them. We didn't. That was the difference in the game."

Lykes couldn't hit from the inside either against the towering Seminoles.

"Our game was to make him go downhill," Walker said. "We didn't want him to get hot from 3, so we tried to escort him to the basket as much as we could. We wanted him to come inside."

Zach Johnson twisted his left ankle in the first half but returned and led the Hurricanes with 20 points and four assists.

The Seminoles made their first five shots to lead 12-3. The Hurricanes cut the deficit to 27-25, but went the final 5½ minutes of the first half without a basket while Florida State sank five consecutive shots to lead 45-27.

Christ Koumadje, the Seminoles' 7-foot-4 senior, made his first four shots, all in the first five minutes, but was ejected for a flagrant foul with 3½ minutes left.

The Seminoles, who have been ranked as high as ninth this season, will likely climb back into the Top 25 on Monday.

Miami hopes for a final ruling soon from the NCAA regarding junior forward Dewan Hernandez, who has yet to play this season because of an eligibility issue. "Tired of being patient?" he tweeted Friday.

The Hurricanes face Top-10 teams in their next two games — No. 10 Virginia Tech at home Wednesday, and at No. 3 Virginia on Saturday.