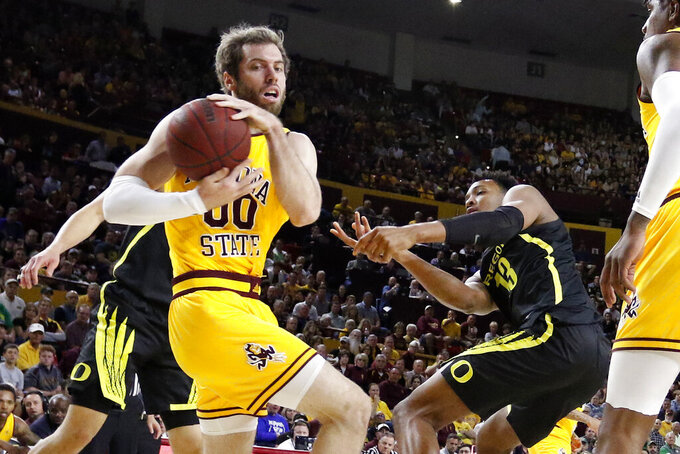 TEMPE, Ariz. (AP) — Arizona State's Remy Martin was fighting for possession during the first half when he caught an inadvertent elbow right to the middle of his face that knocked a tooth loose.

Martin left the game and went to the locker room. A few minutes later, he returned to the court and almost immediately banked home a 3-pointer.

The Sun Devils are familiar with getting knocked down this season. They're showing they can get back up, too.

Arizona State continued its unexpected charge through the Pac-12 standings with its sixth straight win, beating No. 14 Oregon 77-72 on Thursday night. Alonzo Verge Jr. scored 26 points, Rob Edwards added 24 and the Sun Devils withstood a second-half charge by the Ducks to keep their winning streak alive.

“We stayed together, we played together,” Verge said. “That's been the main thing about this whole thing is we've been playing together as a team and having fun. That's what it's about.”

It's the first time Arizona State has won six straight games in the Pac-12 since 1981.

“We've had a lot of adversity all year," coach Bobby Hurley said. “A lot of things we've had to work through and fight through. Nothing was ever easy. So proud of how we battled. Starting out 1-3 (in conference play) and where we've come, it's an amazing run we've been on.”

The Sun Devils (18-8, 9-4) are playing their best following a mediocre January. Every team in the Pac-12 has lost at least four league games.

Arizona State responded with the next six points, which included a 3-pointer from Edwards, and never trailed again.

“We had our opportunity there,” Oregon coach Dana Altman said. “And just didn't take advantage of it.”

Payton Pritchard had 18 points for Oregon but fouled out with about two minutes left, badly hurting the Ducks' chances of a last-minute rally. Will Richardson also had 18 points and Chris Duarte added 10.

“Really bad turnovers,” Altman said. “Sixteen turnovers that led to 19 points. They didn't shoot free throws well and we didn't take advantage of it because we shot them just as bad.”

Oregon struggled for most of the first half, especially in the first few minutes, and missed 11 of its first 12 shots. Arizona State started slowly too, but closed the first half on a 12-4 run. Martin hit a 3-pointer with 10 seconds left to give the Sun Devils a 34-23 halftime lead.

The Ducks shot just 37% in the first half and had 11 turnovers.

Verge's 26-point performance off the bench was a huge boost for Sun Devils. The 6-foot-3 guard shot 10 of 21 from the field and also had three steals.

It was also a huge difference from the first time Verge played against the Ducks this season. He was held scoreless and missed five shots in a 78-69 loss.

“It felt good, it always feels good,” Verge said. “It's even better when we get the win. That's what really feels good.”

Oregon: The Ducks made a run in the second half to make things interesting but couldn't totally overcome their rough offensive game. Oregon's now lost three straight road games.

Arizona State: The Sun Devils continued their mid-season surge with a gritty performance that relied on defense and hustle. The program's trying to make its third straight NCAA Tournament appearance for the first time since the 1960s.

“We know we need these games,” Edwards said. “We don't want to be sitting, watching the TV screen, waiting to see if our name will be called for the tournament. We're trying to get the job done right now so that's secure.”

Oregon has another road game against No. 24 Arizona on Saturday.