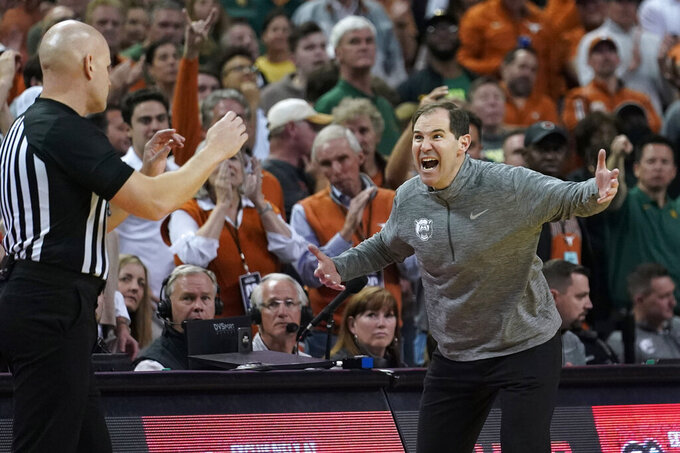 The Big 12 regular-season title and No. 1 seed in next week's conference tournament likely will be decided by two games taking place roughly 600 miles apart on Interstate 35 on Saturday. Third-ranked Baylor (25-5, 13-4) has gone on a late-season charge that culminates with a game against Iowa State at Ferrell Center. The Bears will know what they need to do by the time they tip off because sixth-ranked Kansas (23-6, 13-4), struggling to keep pace down the stretch, plays No. 21 Texas about two hours before at Allen Fieldhouse. No. 21 Texas Tech (23-7, 12-5) swept the Bears and split with Kansas, which means the Red Raiders still have an outside shot at the No. 1 seed heading into their game at Oklahoma State.

“Baylor has to take care of business,” Kansas coach Bill Self said after a tough 72-68 win over TCU on Thursday night, “and I anticipate they will. We have to to keep a piece of it. Saturday will have a different type of fun pressure to it.”

TCU has probably gone from the NCAA Tournament bubble to firmly in the field of 68, especially after splitting a pair of games with Kansas this week. But a win Saturday at West Virginia would take some of the sweat out of Selection Sunday.

Oklahoma and Kansas State are both 6-11 in the league and fighting for conference tournament seeding when they meet in the other Big 12 game Saturday.

Kansas guard Remy Martin has been dealing with injuries all season, and he has hardly played over the past three months — and when he has played, the Jayhawks have usually lost. But his ability to create from the point guard spot makes Kansas a dangerous team, and if he's finally close to healthy, that gives coach Bill Self's team a new dimension for March Madness.

The Big 12 leads the nation in scoring defense at 64.5 points per game. ... Iowa State's Izaiah Brockington was the Big 12 player of the week. He scored 35 points in a win over West Virginia before scoring 17 with eight rebounds in a win over Kansas State. ... The Cyclones, who won just twice last season, reached 20 wins to break the school record for the biggest turnaround. ... Baylor forward Flo Thamba had a career-high 18 points in a win over the Jayhawks in front of a record crowd of 10,628 in Waco, Texas. ... Kansas State guard Nijel Pack has scored in double figures in 19 consecutive games. ... Tanner Groves had 14 points and 10 boards for Oklahoma in a Bedlam win over Oklahoma State. Avery Anderson III had 25 for the Cowboys, the fifth time he's had at least 20 points in a game this season. ... Texas has reached 21 wins for the first time since the 2013-14 season. ... Malik Curry had a season-high 27 points for the Mountaineers against Texas last week.

Fifth-ranked Baylor (24-5, 14-3) heads into the final weekend with a one-game lead over No. 8 Iowa State (24-5, 13-4). The Cyclones face West Virginia on Saturday night before the Bears face Texas Tech on Sunday. ... Baylor has already clinched at least a share of the title for the 12th straight season, despite starting 0-2 in league play. ... Iowa State is trying to earn a share of its first title since 2000. ... Kansas (19-8) heads to Oklahoma trying to reach 20 wins for the first time since the 2012-13 season. ... Taylor Robertson hit Oklahoma's fifth game-winner inside the final minute in Big 12 play this season, this time giving the Sooners a 72-69 win over Kansas State. ... TCU's Lauren Heard broke the Big 12 record last week with 151 career games played. ... Texas heads into the final weekend with seven straight league wins, its longest streak since 2018. ... Esmery Martinez had 22 points and 19 boards in West Virginia's double-overtime win over Kansas State.