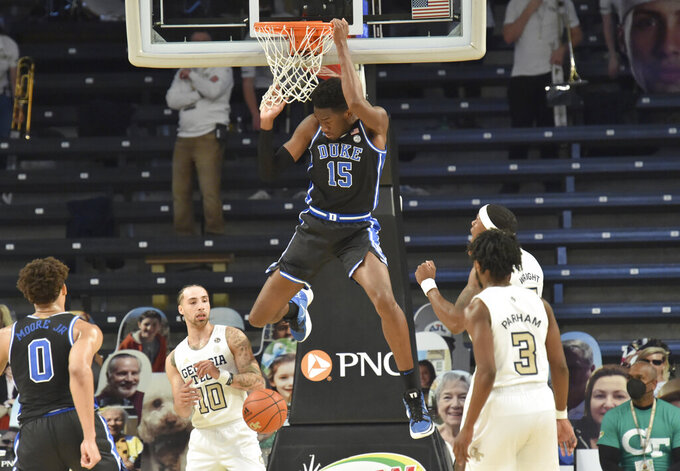 FILE - Duke forward Jaemyn Brakefield (15) hangs from the basket after a dunk against Georgia Tech during the second half of an NCAA college basketball game in Atlanta, in this Tuesday, March 2, 2021, file photo. Mississippi has seven newcomers, including Brakefield. (Hyosub Shin/Atlanta Journal-Constitution via AP, File)

The Rebels relied heavily on defense last season with one of the Southeastern Conference's stingiest and lowest scoring teams. The formula was only good enough for a 16-12 record and NIT berth.

Davis wants that influx of talent to translate into more points for a team that ranked 237th nationally in scoring, averaging just 68.8 points per game. The Rebels are hoping to win with more than defense and rebounding.

“We need to have more possessions,” Davis said. "I think our team is much faster in transition as a whole. We shoot it better.

“The biggest thing is we want to play it fast, smart, and unselfish. If any of you can do those three things with great toughness, now you have a great product and people want to come watch that.”

Leading rebounder Luis Rodriguez is also back after averaging 7.6 points and 6.3 rebounds.

Brakefield was a five-star recruit out of high school now back in his home state (he's from Jackson). He played in 22 of Duke's 24 games as a freshman, averaging 3.5 points and 2.5 rebounds. Davis said Brakefield is one of the team's best 3-point shooters.

Davis thinks Joiner is set to prove he belongs in a group of recent standout guards at Ole Miss, from Terence Davis to Breein Tyree to Shuler. The coach says Joiner has made “unbelievable" improvement from last season and put on some weight to about 180 pounds.

“I think he’s got maybe the best mid-range game in college basketball, and he’s improved his 3-point shooting,” Davis said. "He can really be an elite guard that can play at all levels.”

Fagan arrived after playing three years at Georgia. He started all but one game last season, averaging 9.2 points and leading the team in shooting percentage (58.7).

The 7-foot Brooks has played in 130 Division I games at Cincinnati and Miami.

Ole Miss played itself into NCAA Tournament consideration with a late-season run. Then the Rebels shot less than 41% in their final two games, losing to LSU in the SEC Tournament quarterfinals and to Louisiana Tech in the NIT first round.

The Rebels open Nov. 9 against New Orleans and have nonconference games that include Marquette, Memphis, Western Kentucky, Kansas State and potentially West Virginia.