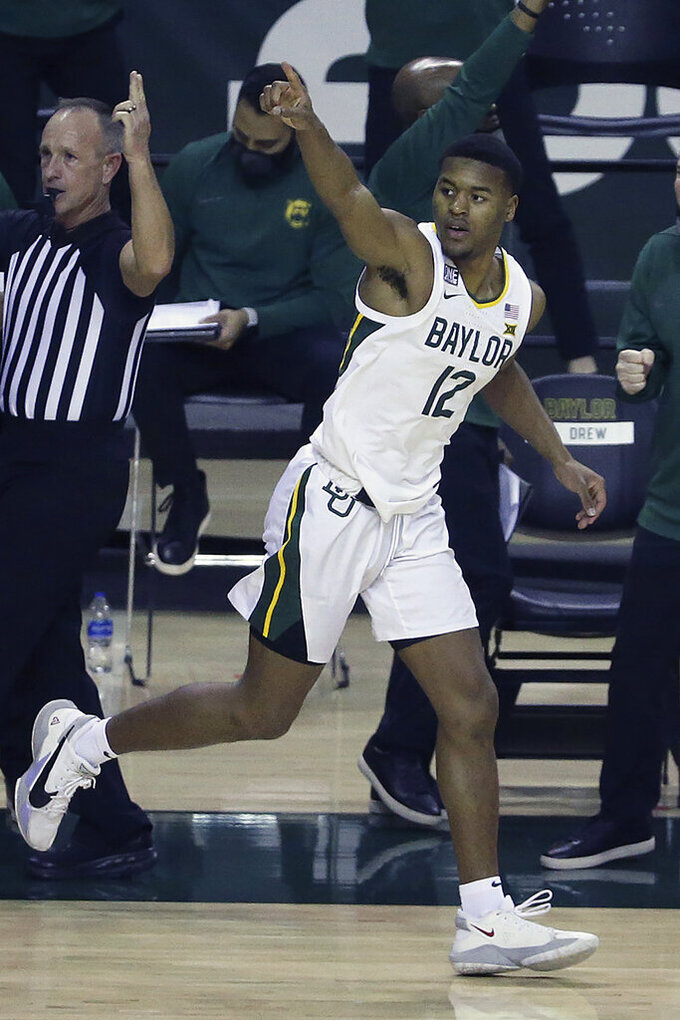 FILE - Baylor guard Jared Butler (12) reacts after making a three-point shot against Oklahoma State in the second half of an NCAA college basketball game in Waco, Texas, in this Thursday, March 4, 2021, file photo. Baylor guard Jared Butler is The Associated Press Big 12 men's basketball player of the year and a member of the All-Big 12 first team, announced Tuesday, March 9, 2021.(AP Photo/Jerry Larson)

Baylor guard Jared Butler is The Associated Press Big 12 player of the year after helping the Bears win their first conference title, averaging 17.1 points while leading the league in 3-point shooting and steals.

The only unanimous picks on the AP team announced Tuesday were Butler and Cunningham, the 6-8 freshman who was named Big 12 newcomer of the year.

Baylor’s Scott Drew is the top coach for the second season in a row.

Butler, with 2.7 made 3-pointers a game while shooting 44.4% from long range, got 11 of 16 votes for player of the year from a panel of journalists who regularly cover the Big 12. Butler has 2.1 steals a game and is second in the league at 4.95 assists.

The Bears (21-1) won their first 18 games for the best start in school history, and the Big 12 title is their first in any league since winning the Southwest Conference in 1948.

Cunningham got the other five votes for top player. He got 13 votes for newcomer of the year, and McClung the remaining three.