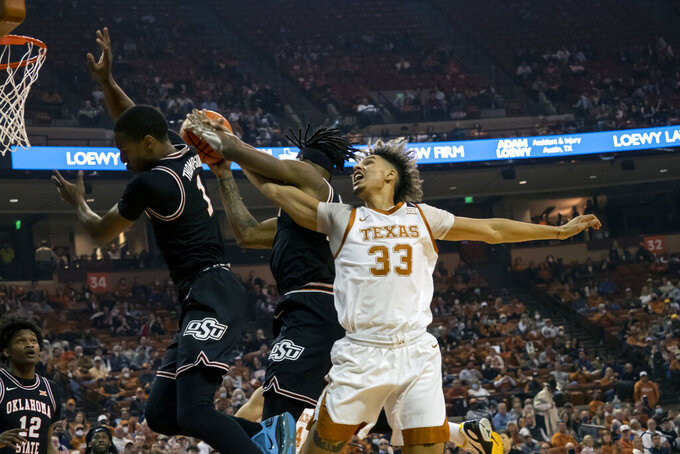 AUSTIN, Texas (AP) — Texas didn't shoot the ball well and handled it sloppily at times. But when the Longhorns needed determination and skill, they were able to summon both.

The Longhorns (14-5, 4-3 Big 12 ) won despite going more than 10 minutes without scoring in the first half. They were coming off losses to No. 15 Iowa State and Kansas State.

Texas overcame 36.7% shooting and 20 turnovers that matched a season high — four in the final 3:13. Oklahoma State made 12 steals, six by Rondel Walker.

“We're so excited about this win,” forward Timmy Allen said. “That's all that really mattered, no matter how we got it done.”

Tre Mitchell scored 12 for Texas, including a bank shot in the lane with 56 seconds left. Allen had 11 points and eight rebounds. Courtney Ramey added 10 points, including a pair of free throws with 11 seconds remaining, and seven rebounds.

Texas hit 14 of 16 free shows, with Carr converting all eight of his attempts.

Sophomore Bryce Thompson scored a career-best 20 for Oklahoma State (10-8, 3-4), including a layup with six seconds left before Carr's free throws. But he couldn't carry OSU through a second half in which it shot 32% and made nine turnovers.

Texas, leading by one point with nine minutes remaining, created some separation by making an 11-3 push. Allen and Carr scored four apiece, and Ramey made a 3-point shot from the corner during the spurt.

Oklahoma State led 27-25 after a wildly streaky opening half. Texas converted its first three 3-point attempts and raced to a 13-0 lead.

“Obviously, from the outside looking in, it seemed like they played like their backs were against the wall,” Oklahoma State coach Mike Boynton said. “And like they needed to come out like a ball of fire. They did, obviously."

Then the Longhorns went scoreless for 10:15 and Oklahoma State scored 16 straight.

After the hot start, Texas missed 10 of its last 12 3-pointers, finished the half at 36% overall and committed 10 turnovers against a swarming, aggressive Oklahoma State defense.

Thompson scored six points in the final 2:30 for the Cowboys, but they had to foul, and Texas made those four free throws in the final 11 seconds after Mitchell's basket.

“I'm proud of our guys for responding the right way,” Boynton said. “But you dig yourself that big a hole on the road in this league and an already difficult task becomes that much greater.”

Oklahoma State: The Cowboys, after limiting Baylor to 31% from the field and TCU to 34.5%, held Texas to 36.7% ... Bryce Williams, Oklahoma State's leading scorer at 10.6 points a game, did not play against Texas because of a sprained ankle that he suffered against TCU on Wednesday. Keylan Boone, who had five 3-point baskets as a reserve during a 64-51 win over Texas on Jan. 8 in Stillwater, made his first start but went scoreless in 23 minutes.

Texas: The Longhorns failed to score during the final 3:32 during a 66-65 loss to Kansas State on Tuesday in Austin, so coach Chris Beard was pleased that his team recovered from that one and won a close game. “We were dialed in today,” Beard said. “Now we'll see if we are mature enough to do that after a win.”

There was a period after Beard became the Longhorns coach that he only had one player committed for this season, reserve Brock Cunningham, a junior forward who dives and hustles for loose balls and rebounds. Cunningham had modest stats in 10 minutes against Oklahoma State — two rebounds, a steal and an assist. But his assist was critical. Cunningham took a pass from Christian Bishop in the lane, turned and found Ramey in the corner for a 3-point basket that gave Texas a 44-37 lead with 6:45 remaining.

“Brock does a great job of doing whatever is necessary to win,” Allen said. “He always just makes a Brock play. He’s a guy that you want on your team, and when he’s not on your team, you’re frustrated.”

Oklahoma State: The Cowboys host No. 15 Iowa State on Wednesday.

Texas: The Longhorns are at TCU on Tuesday.