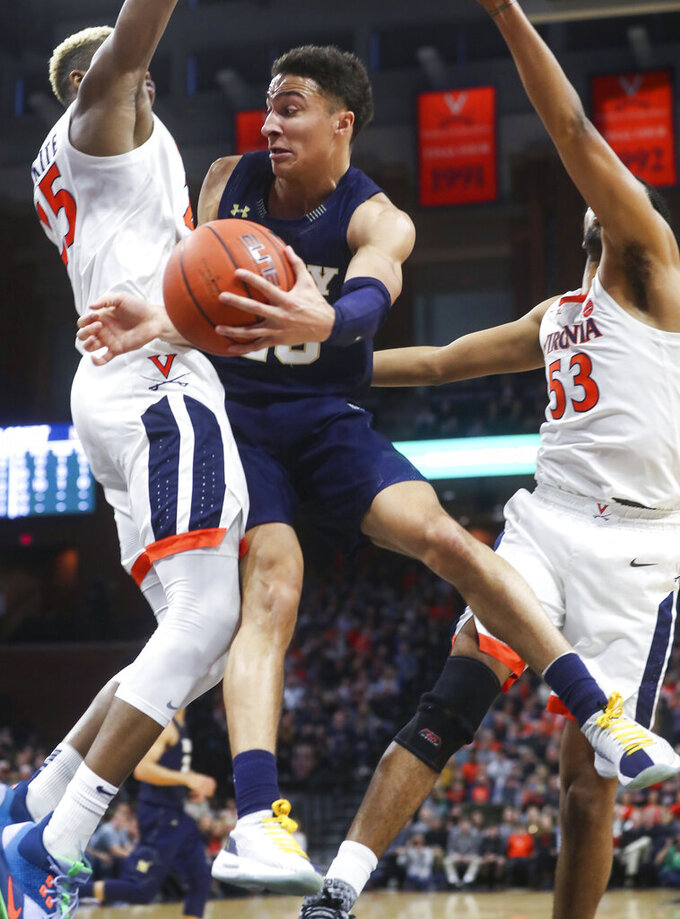 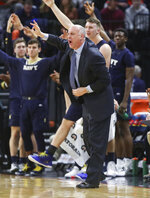 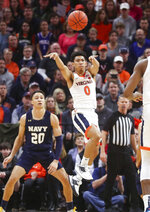 CHARLOTTESVILLE, Va. (AP) — Even with a cast on his surgically repaired left hand, Braxton Key is emerging as a player No. 16 Virginia needs to have on the floor.

Key and Kihei Clark each had five points during a 12-0 second-half run and the Cavaliers overcame a sloppy effort to beat Navy 65-56.

“I try to do whatever the team needs to win,” said Key, who scored 15 points on 7-of-11 shooting and grabbed seven rebounds. “If I have to score, I'll do that.”

Coach Tony Bennett will take the points, but he's more concerned with Key crashing the boards and being one of the anchors of Virginia's defense.

Key energized the crowd with a put-back dunk on which he reached high in the air, grabbed the rebound with his right hand and slammed it through the hoop.

“He's steadily gotten more time and played better and we needed it,” Bennett said, noting the cast protecting Key's left hand continues to be streamlined so it's not as bothersome. “I just keep challenging him to be as great as he can defensively, all over the glass and then keep finding ways to be effective offensively, and he did that.”

Clark's foul-line jumper with 9:09 remaining gave the Cavaliers the lead they had just relinquished. Key added two baskets, one resulting in a three-point play, and Clark barely beat the shot clock with a 3-point heave that rattled in, giving Virginia a 50-41 lead.

Cam Davis led Navy (6-5) with 19 points and Evan Wieck had 13. The loss was the 19th in a row for the Midshipmen when facing a ranked opponent.

The Cavaliers had only one turnover in the first half but added seven in the second as Navy slowly cut into the lead. A 3-pointer by John Carter Jr. gave the Midshipmen a 41-40 lead with 10:39 to go, but Clark's jumper got the Cavaliers the lead back and they scored the next 10 points.

Earlier in the half, they turned the ball over repeatedly when trying to get it inside.

“We got trapped in the post a couple times, some careless turnovers. It sort of piled up,” Bennett said.

Navy coach Ed DeChellis blamed poor shot selection on the Midshipmen's fade after taking their only lead of the season half.

“Trying to put 10 pounds of potatoes in a five-pound sack,” he called it. “We were just trying to jam it in there. They were batting it down and then they start their transition game and that's how they got us.”

Virginia outscored Navy 11-4 off the fast break and 19-4 from the bench.

Navy: Wieck is the only senior on the Midshipmen's roster. Navy shares the lead among all teams nationally with 11 freshmen, and they also have five sophomores, making this close game an encouraging sign.

Virginia: The Cavaliers led 37-29 at halftime but managed just one basket — a 3-pointer by Diakite — before Clark's foul-line jumper with 9:09 remaining. Including a buzzer-beater to end the first half, Navy outscored Virginia 15-3 in that 11-minute stretch to take the crowd-silencing 41-40 lead.

Virginia freshman Casey Morsell came into the game 6 for 48 on 3-point tries and made 2 of 6, while transfer Tomas Woldetensae was 2 for 4 from beyond the arc after making just 9 of 32 coming into the game. The Cavaliers have five players shooting below 30% from 3-point territory and came into the game shooting 26.1% as a team.

The Midshipmen return home to face Lehigh on Thursday night.