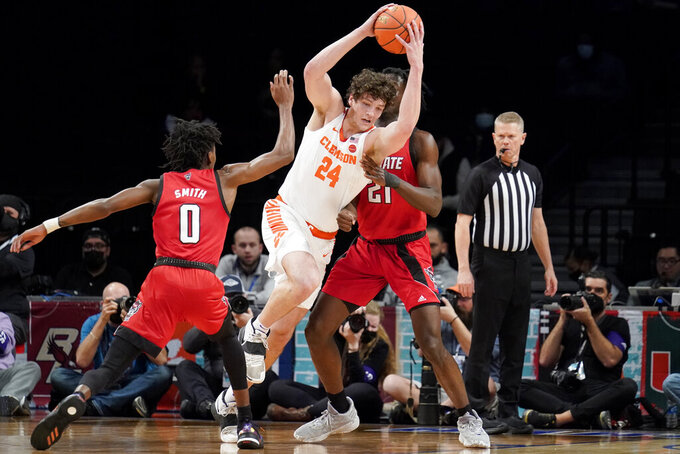 NEW YORK (AP) — PJ Hall had 18 points and 10 rebounds, Nick Honor scored 11 of his 13 points in the second half and No. 10 seed Clemson beat 15th-seeded North Carolina State 70-64 on Tuesday in the opening round of the ACC tournament.

Clemson (17-15) has won five straight games, and will play No. 7 seed Virginia Tech on Wednesday in the second round. The Tigers took down the Hokies 63-59 in the regular-season finale on March 5.

Dereon Seabron made four straight free throws in a little over a minute late in the second half to get N.C. State as close as six points, but Al-Amir Dawes and Chase Hunter answered each trip to the line with 3-pointers to keep Clemson in control.

N.C. State got as close as five points with 1:15 to go, but Hall made two free throws and blocked Seabron's shot at the other end to seal it.

Seabron scored six straight N.C. State points during a 8-2 run to pull within 39-36 with 12:18 left. But Clemson scored the next eight points, with back-to-back 3-pointers by Honor.