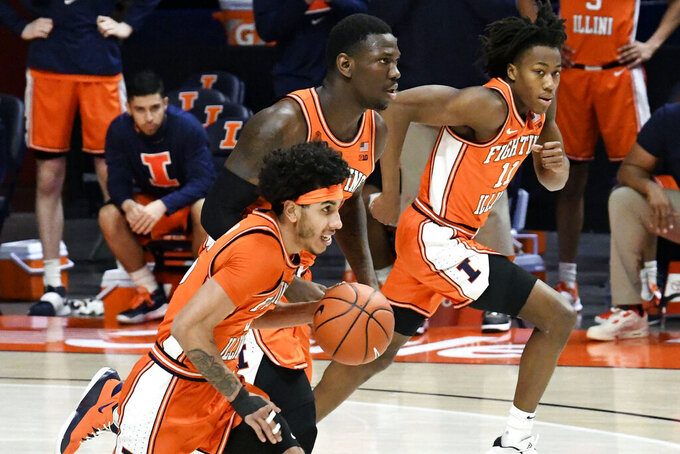 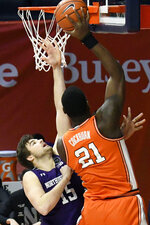 Cockburn's double-double was his 14th of the season for the Illini (20-5, 11-3 Big Ten), who took control early in their sixth straight win.

Illinois led 25-7 early but saw its lead cut to two points with 1:30 left. Dosunmu, quiet most of the night, hit a long 3-pointer to ice the win.

Illinois had several early scoring runs despite foul trouble for Cockburn, who sat for all but five minutes of the first half. The Illini shot 60% from the field before the break to Northwestern’s 37% and led 38-26 at halftime.

“It was a thing of beauty, the first seven, eight minutes,” Illinois coach Brad Underwood said. “But then Kofi got into foul trouble.”

Northwestern regrouped, going on a 14-4 run to cut the lead to four points. Illinois' Trent Frazier hit a 3-pointer and Cockburn followed with a layup.

“To start the game, we were on our heels a little bit. That first 10 minutes was just not us," Northwestern coach Chris Collins said. "We played really well, and it’s just not good enough.”

Dosunmu, a Big Ten Player of the Year candidate, only had three points at the half and seemed content to let his teammates control the offensive flow. But he was there when his team needed him to close out the game.

“I'm a winner and I look for the win at the end of the day,” Dusunmu said. “My closing instincts just took over. Some nights I don't have to score 30 points for us to get the win.”

Collins was impressed with the Illinois junior.

The Big Ten is arguably the best conference in college basketball and Illinois takes no opponent for granted, Dosunmu said.

“The Big Ten is good from top to bottom,” he said. “It feels good for us to get the win. Every night is a dogfight in this conference, no matter who we are playing.”

After beating Nebraska 77-72 in overtime last Friday, the Illini needed an easy win against another unranked team. Although the game tightened late, Illinois still got valuable playing time for bench players that could pay dividends with three tough road games upcoming.

Illinois: Begins a three-game road stretch against Minnesota on Saturday. The Illini are scheduled to play four of their final five games away from State Farm Center.