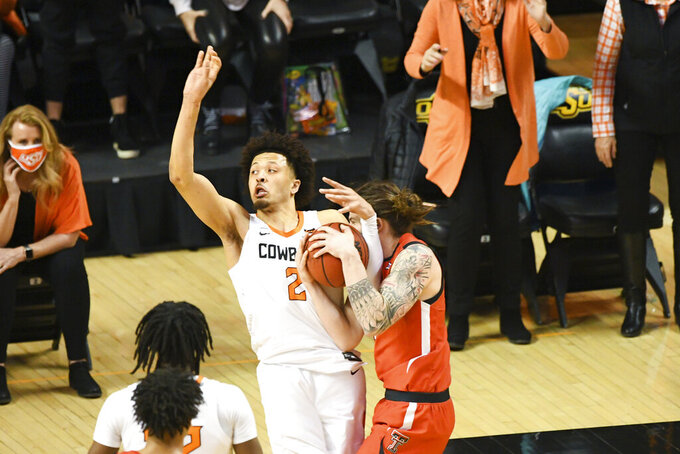 STILLWATER, Okla. (AP) — Cade Cunningham scored 20 points and Oklahoma State got past Texas Tech in overtime for the second time this season, beating the 18th-ranked Red Raiders 74-69 on Monday night.

Cunningham, the Big 12's leading scorer and one of the nation's top freshmen, put on a show in front of about a dozen NBA scouts and executives, including Oklahoma City Thunder general manager Sam Presti. He made 8 of 13 shots and had five rebounds.

Kalib Boone scored 18 points and Avery Anderson III added 16 for the Cowboys (15-6, 8-6 Big 12), who rallied from an 11-point second-half deficit with Cunningham on the bench due to foul trouble. Oklahoma State also beat Texas Tech in overtime on Jan. 2.

Oklahoma State made 15 of 24 free throws in regulation but drained 7 of 8 in the extra period to claim its third straight win.

The discrepancy in free-throw attempts clearly bothered Beard, although he did not directly criticize the officials.

Tech led 37-36 at halftime. The Red Raiders scored the first six points of the second half, and Oklahoma State coach Mike Boynton called a timeout.

Cunningham committed his fourth foul three minutes into the second half. Shortly after Cunningham sat, McClung hit a tough turnaround jumper to put Tech up 45-36. The Cowboys missed their first nine shots of the second half and didn't score for more than 6 1/2 minutes.

Oklahoma State rallied without Cunningham. Keylan Boone made a 3-pointer to finally get the Cowboys on the board in the second half. Anderson's layup on a baseline cut tied the game at 47, and Oklahoma State finally took the lead on a pair of free throws by Kalib Boone.

“I think what it says is we have a really good team," Boynton said. "Maybe those other guys aren’t as high in terms of their ceiling. I don’t think you’ll see them next year in an NBA uniform. They are some really gritty, really good college basketball players on our roster.”

Anderson said Boynton gave the team confidence that it could rally.

“Stick to what we do and keep getting stops and shots are going to fall,” he said. “And that’s what happened. We just kept getting stops on the defensive end.”

Oklahoma State: The Cowboys were gritty, especially with Cunningham on the bench. They have stacked up some big wins.

Beard on a technical drawn by Clarence Nadolny: “We can’t have player technical fouls in a one-possession Big 12 road game in February. We can’t have key players trying to have conversations with college officials. That doesn’t work that way.”

Keylan Boone entered the game having made 7 of 13 free throws on the season, but he made two critical ones with 14 seconds remaining in overtime.

Texas Tech will host No. 14 Texas on Saturday.

Oklahoma State will visit No. 7 Oklahoma on Saturday.