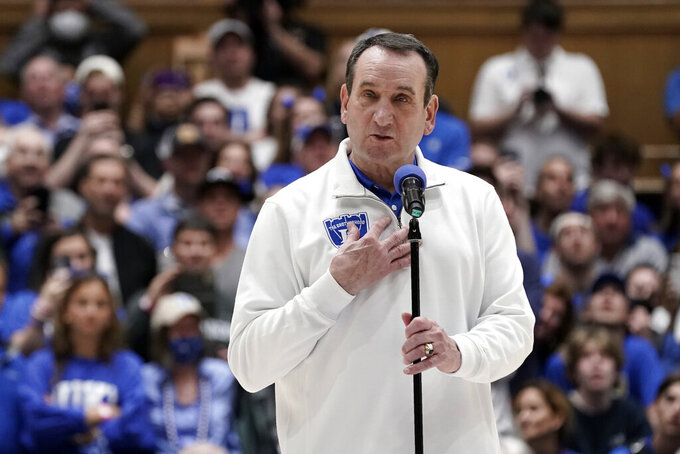 DURHAM, N.C. (AP) — Mike Krzyzewski's final home game at Duke had just ended in an unexpected defeat to the Blue Devils' fiercest rival. The time had come for the school to hold its postgame on-court ceremony in Krzyzewski's honor.

Only, the retiring Hall of Famer was still thinking about Saturday's 94-81 loss to North Carolina.

"I’m sorry about this afternoon,” he began, then waved off cheers from the fans. “It was unacceptable. Today was unacceptable, but the season has been very acceptable. And I’ll tell you: this season isn’t over, all right?”

It was a slightly awkward moment to start of the ceremony, yet a sign that the 75-year-old coach was already thinking and driven about what's still to come: a maximum of nine games left for the No. 4 Blue Devils with chances to win the Atlantic Coast Conference Tournament and a sixth NCAA championship.

“It's not my last game — it's my last game in Cameron,” he told reporters afterward. “But it seemed like it was your last game. ... So many people are saying great things about you and whatever, and you say, ‘It’s not over yet.'"

The focus had been on Krzyzewski all week leading up to the rivalry game that was an even bigger spectacle than usual.

It drew more than 90 former players who participated in a pregame photo with their coach, taken from the Cameron rafters. And there were other celebrities in the building.

There was also a sighting of retired NBA great Dirk Nowitzki, who took a walkthrough of the Duke practice facility earlier Saturday and ran into current player Wendell Moore Jr. Moore quickly asked for a photo with the former world champion.

The buzz turned to disappointment by the end of the game as Krzyzewski left the court to talk to his team in the locker room. But the seats in Cameron remained full as fans awaited his return for the school's postgame ceremony, which included Krzyzewski holding his wife Mickie's left hand while everyone watched a presentation on the videoboard about Krzyzewski's long run of success in Cameron.

The ceremony ended with Krzyzewski's family, children and grandchildren included, at midcourt as he addressed the crowd a second time.

“For my entire family, all these munchkins here, thank you,” Krzyzewski said. “This has been so ...”

Krzyzewski trailed off, offering a wave as the cheers began to erupt. Then he and his family began walking off the court a final time, with the coach giving a few claps and a thumbs-up along the way.

His time at Cameron may be over, but there's still work ahead.