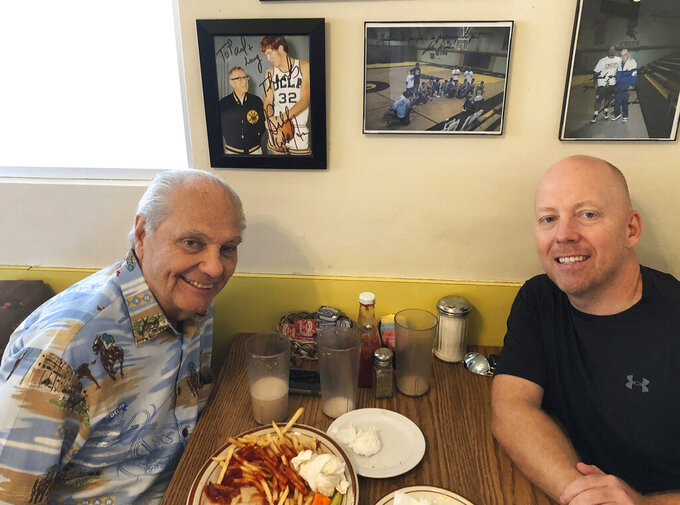 In this 2019 photo provided by UCLA Athletics, Hep Cronin, left, sits with his son UCLA men's basketball coach Mick Cronin, right, at the Wooden's booth at VIP's Cafe in the Tarzana section of Los Angeles where legendary UCLA coach John Wooden used to have breakfast every morning. Mike's dad has become an unlikely celebrity during the Bruins' run to the Final Four in his son's second season in Westwood. (UCLA Athletics via AP)

Father's Day has come early for Hep Cronin this year. Actually, it has been more like Father's Month.

The 79-year-old dad of UCLA coach Mick Cronin has become an unlikely celebrity during the Bruins' run to the Final Four. CBS and Turner's cameras have been focused on the elder Cronin as much as his son during the games.

The cameras will be pointed at Hep Cronin again Saturday when UCLA faces Gonzaga for a chance to play in the national title game.

“I wouldn't be here if it wasn't for him,” Mick Cronin said after Tuesday's 51-49 win over Michigan, which propelled UCLA into its first Final Four since 2008. “It's been tough because I would love to hug him or say hi to him or friends but I can't, but that means we are winning.”

The cameras first zoomed in on Hep Cronin during UCLA's First Four game against Michigan State and after the 86-80 overtime victory when father and son saw each other in person — albeit separated by a railing — for the first time in more than a year.

Since that game, Hep's celebrations, fist pumps or him tossing his face mask after Alabama made a 3-pointer to force overtime during the East Regional semifinals have been must-see moments.

“Everyone has said it has gone from Sister Jean (of Loyola Chicago) to Father Hep. I didn't expect it,” he said. “I've been walking up aisles and people I don't know are asking me to take a picture. I'm wondering why do they want me?”

Dan Cronin, Mick's older brother, said he has seen his dad get more of a kick out of being in the spotlight as the tournament has progressed.

“When people start calling him Father Hep he just starts giggling. He loves it because everyone keeps walking straight to him and shaking his hand and introducing themselves,” Dan Cronin said.

Dan Hoard, who announces University of Cincinnati football and basketball games, remains a close friend of the Cronin family and said he was also amused to see Hep become popular among the UCLA faithful.

“He has become a rock star,” said Hoard, who was at Tuesday's game. “These young UCLA students were like: ‘There he is. There’s Mick’s dad.' You know at this stage of his life to get that it was really cool."

What most people might not realize is that Hep Cronin is also very accomplished. He played baseball at Cincinnati before winning more than 400 games as a high school basketball coach. Some of those wins were with Mick and Dan at Cincinnati LaSalle.

Cronin was also a scout for the Atlanta Braves. His evaluations of David Justice and Hall of Famer Chipper Jones were major reasons they were drafted. Cronin said he has received calls from Kansas City general manager Dayton Moore and former Atlanta GM John Schuerholz during the Bruins' tournament run.

Hep was also there when Mick got his first coaching opportunity. The two were scouting a high school game when one of the coaches saw Mick and offered him a job as a varsity assistant and freshman coach. It was from that opportunity that Cronin would ascend the ranks, to video coordinator and later an assistant at Cincinnati, Rick Pitino's top assistant at Louisville and then the head coach at Murray State, Cincinnati and UCLA.

“You just feel good for your dad because in these COVID times so many people have lost their dads and grandpas. Getting to the Final Four this year and to be able to share it with him has meant a lot to our family,” Dan Cronin said.

After Hep Cronin retired from coaching, he was a mainstay around Cincinnati's program, watching his son's practices and games while being available to offer advice. He went to LA for 12 practices and 14 games during Mick's first season at UCLA last year but wasn't able to this season due to the pandemic.

Hep and Dan haven't been the only ones along for the ride during the tournament. Cronin's sister, Kelly, has been to all the games and Mick's daughter, Sammi, is staying with the family during the tournament. During UCLA's win over Michigan, there were a lot of close friends and former players in the stands.

Saturday's game isn't the only exciting thing going on this weekend. Hep, who has passed on his love of horse racing to his sons, was at Keeneland on Friday as the racetrack opened its spring meet. The family will spend time at an Indiana track watching Kentucky Derby prep races from throughout the country before going to the game.

Mick was expecting to keep one eye on Santa Anita on Saturday. But a filly named Brilliant Cut that he has minority ownership in was scratched from her scheduled start in the Santa Anita Oaks.

The Bruins will be long shots against undefeated Gonzaga. But if the game is close, Hep Cronin likes UCLA's chances to pull off an upset.

“We've got a formula, we’re planning really well and all we can do is hope that it works again. But we're playing a team that looks like they could be one of the best teams in the last 25 years,” he said. “At least we were in position. If you told me the score is 50-50 with six minutes to play, I'll take it. We’ve played every game like this for the last 10 games.”