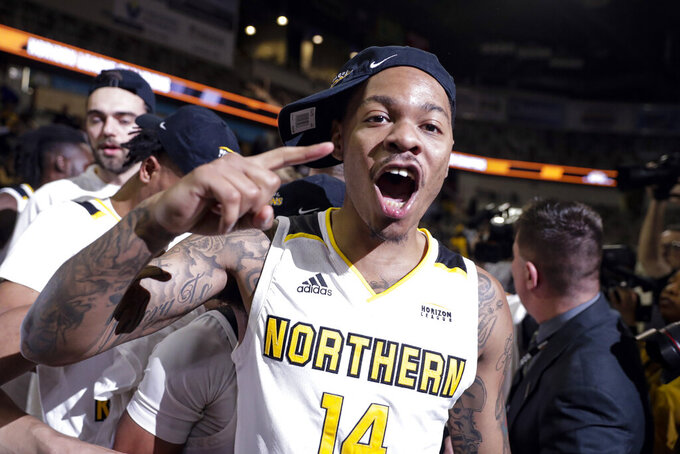 FILE- In this March 10, 2020, file photo, Northern Kentucky guard Karl Harris (14) celebrates following an NCAA college basketball game against Illinois Chicago in the Horizon League men's tournament championship in Indianapolis. Another dream, of playing in the NCAA Tournament, became a reality when Northern Kentucky clinched the Horizon League tournament title in March. Mere hours later, it was snatched away by a pandemic spiderwebbing across the globe. (AP Photo/Michael Conroy, File)

His older brother, both best friend and basketball running mate, was gunned down in a case of mistaken identity. The train ride to school through Chicago's South Side delivered daily horrors: drugs, gang violence, death.

Every time life knocked him down, Harris shoved right back. He worked tirelessly to earn a Division I scholarship, walked across the stage as his family's first male college graduate.

“He's been through some stuff and things haven't always worked out the way he wanted to, but he kept coming back and kept going,” Northern Kentucky coach Darrin Horn said. “He's still tried to find a way to make things better and still get to where he wants to go. He just has a great humility and appreciation about himself.”

He was 2 when Charles, his father and a police officer, died waiting for a liver transplant that never came. With no real firm memories of his own, Harris relied on his brothers' stories, puffed with pride when they'd say how much he looked like him. They even called him “Slim,” Charles' nickname.

Harris' brothers helped the kid who later became known as “Chief” keep out of trouble, serving as a surrogate father by committee.

He didn't have a car, was five hours from home and many of the restaurants closed at 9 p.m. — opposite the life he knew in Chicago and Philadelphia.

Harris debated whether to skip his final year of eligibility before a conversation with Horn altered his course. Sold by the first-year coach's message and Northern Kentucky's veteran roster, Harris made the latest move in his basketball odyssey, to Highland Heights, south of Cincinnati.

The smile on Harris' face seemingly spread across entire the arena after the Norse beat UIC in the Horizon League title game. His dream of playing in the NCAA Tournament had been realized.

Not long after Northern Kentucky's victory, the growing coronavirus pandemic led to the cancellation of March Madness.

“My heart almost dropped to the floor,” Harris said. “I’m still in disbelief, like, man, this was the last year that I got in and they canceled it. It's almost like it's not for real.”

The pandemic may have spoiled one dream, but Harris has his sights set on another. He's spent the time during the shutdown putting up shots and staying in shape.

“It's just continuing to grind every day,” he said. “I look at every experience I've had in my college journey as a place I need to be at that moment to learn and grow and get better and just prepare me for the next place.”