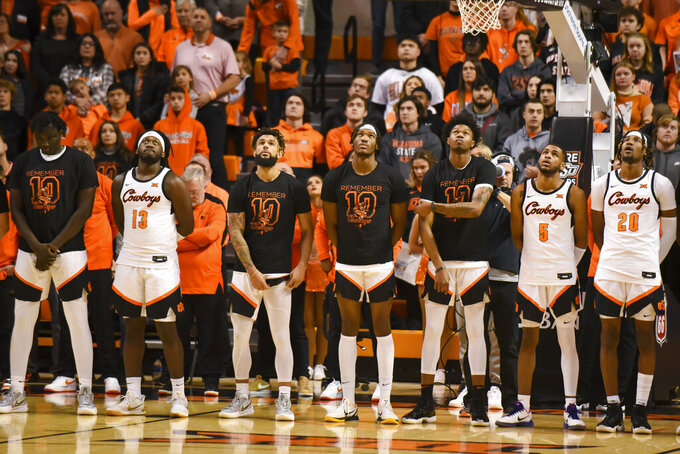 Oklahoma State players observe a moment of silence to "Rememember the Ten", prior to an NCAA college basketball game Saturday, Feb. 5, 2022, in Stillwater, Okla. Ten members of the Oklahoma State basketball program were lost to a plane crashed following a game at Colorado on Jan. 27, 2001. (AP Photo/Brody Schmidt) 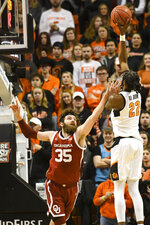 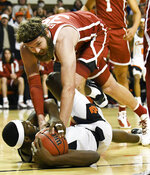 STILLWATER, Okla. (AP) — Oklahoma State can't play in the postseason, so the Cowboys decided to treat their matchup with rival Oklahoma like a postseason game.

Oklahoma State can’t play in the postseason because an NCAA infractions committee denied the school’s appeal two months ago regarding violations by former assistant coach Lamont Evans. That made the Bedlam game the next-best thing.

Tanner Groves scored 23 points and Elijah Harkless added 15 for Oklahoma (13-10, 3-7), which has lost seven of eight after a fast start under new coach Porter Moser.

“Our young guys — they want to win,” Moser said. “They’re great guys. They play hard. They do good things. It’s just — they’ve got to play smart.”

Oklahoma jumped out to a 20-13 lead, but an alley-oop dunk by Cisse on a lob from Isaac Likekele cut the Sooners' lead to 20-19. A tip-in by Oklahoma State's Keylan Boone tied the game at 23 with about four minutes left in the first half. Keylan Boone's 3-pointer with about a minute left in the half gave Oklahoma State a 29-28 lead, a margin that held until the break.

Avery Anderson's acrobatic up-and-under left-handed layup gave Oklahoma State a 38-32 lead with just under 13 minutes to play, and Keylan Boone's dunk on a pass from his brother, Kalib Boone, made it 40-32. The Cowboys led by at least four points the rest of the way.

“A lot of the season, we won in the first half, we’re up or we’re tied, and then we relax,” Cisse said. “I feel like we get comfortable. And then today, we were like, ’This is a big game for us. This is like an important game for us. So we’ve got to stay locked in until the end of the game.' I feel like everybody was locked in.”

Oklahoma buckled, committing 11 turnovers in the second half.

“Late in the game, they were just trying to do it too much on their own again," Moser said. "It went down the line. We’ve got to get some guys knocking down some shots.”

Oklahoma: The Sooners shot 37.7% overall. In the second half, they made just 1 of 10 3-pointers and never attempted a free throw.

Oklahoma State: The Cowboys were the more aggressive team and outscored Oklahoma 12-3 at the free-throw line. They finished strong and shot 52.4% in the second half.

Oklahoma State had a pregame moment of silence to recognize members of the program who died in a plane crash on Jan. 27, 2001. The men who perished were: Denver Mills, Nate Fleming, Daniel Lawson, Jared Weiberg, Pat Noyes, Bill Teegins, Will Hancock, Brian Luinstra, Kendall Durfey and Bjorn Fahlstrom.

Oklahoma State guard Bryce Williams was back after missing four games with an ankle injury. He scored two points in 23 minutes.

Kalib Boone as he thanked the crowd for showing up on a cold day: “I’m not going to lie to you, if it was me and this weather was this bad, I’m just turning on the TV.”

Likekele did not score, but he had seven rebounds and six assists. ... Harkless committed eight of his team's 17 turnovers.