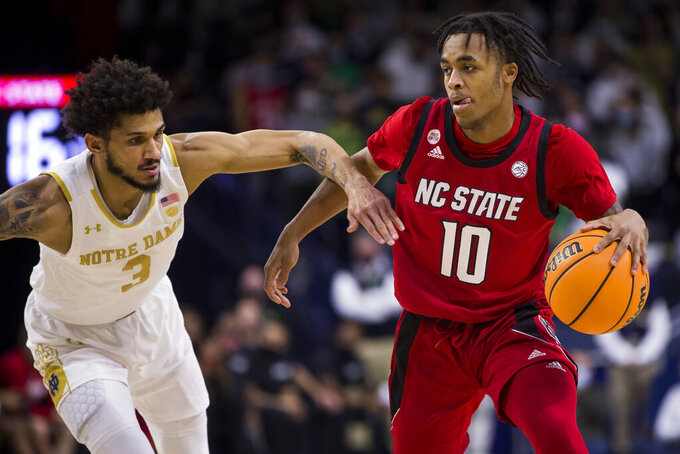 SOUTH BEND, Ind. (AP) — Nate Laszewski scored 18 points, including eight straight to give Notre Dame the lead for good in the second half, and the Fighting Irish defeated North Carolina State 73-65 on Wednesday night.

Laszewski made four 3-pointers and had 11 rebounds for his fourth double-double this season. Dane Goodwin also had four 3-pointers — his final one putting Notre Dame (13-6, 6-2 Atlantic Coast Conference) ahead by nine with 55 seconds left — and finished with 17 points and eight rebounds. Blake Wesley added 15 points and Prentiss Hubb 11 with five assists.

Dereon Seaborn had 21 points and eight rebounds for the Wolfpack. Jericole Hellems added 14 points and Casey Morsell and Cam Hayes 10 each.

After NC State scored five points to break a halftime tie, Notre Dame went on a 15-0 run over three minutes and led 45-35 with 14 minutes remaining, the first double-digit lead of the game. Laszewski scored the first eight points in the run and 11 total.

A Morell 3-pointer got NC State within three midway through the half but Goodwin started a 7-0 run with a 3-pointer and the Wolfpack didn’t get that close again.

Both teams shot 38% in the first half that had eight lead changes and ended at 30-all, the seventh tie.

NC State plays at North Carolina on Saturday while Notre Dame, which has won three straight and nine of its last 10 games, will be home against Virginia.