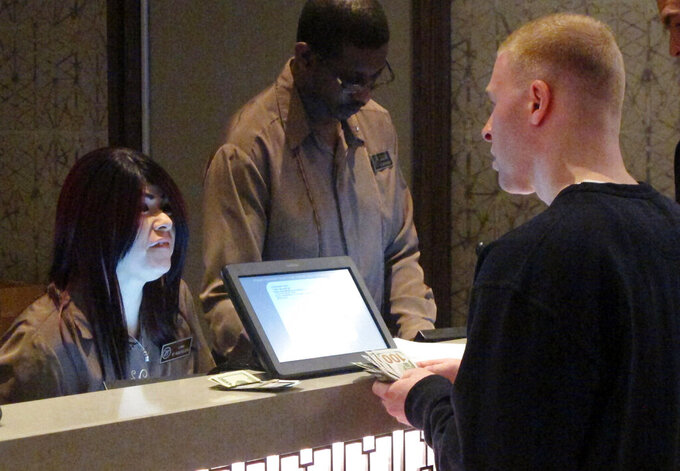 In this March 21, 2019 photo, a gambler places a bet on the NCAA men's college basketball tournament at the Borgata casino in Atlantic City N.J. Figures released on Friday, April 12, 2019, show gamblers bet $372.4 million on sports in New Jersey in March, the second-highest monthly total ever, with the March Madness tournament accounting for a significant part of the wagering. (AP Photo/Wayne Parry)

More than $372 million in sports bets were made in the state last month. That brings New Jersey's total since sports betting began last June to over $2.3 billion.

After paying off winning bets and accounting for expenses, New Jersey's sports books have made over $63 million from sports betting and paid $7.7 million in state taxes in the first three months of this year. New Jersey and Delaware are the only states with newly legalized sports betting to meet their tax revenue projections from the betting.

Several sports books said the number of bets on the college basketball tournament and their dollar amounts exceeded those from the NFL's Super Bowl.

"In this year's first ever March Madness with legalized betting available, U.S. bettors further proved to be fervent college basketball fans, and submitted more bets on DraftKings Sportsbook for the opening weekend of the NCAA Tournament alone than the Super Bowl," said Jamie Shea, the company's head of digital sportsbook operations. "While March had certainly been marked on our calendars before, this past tournament gave us a glimpse into the staggering business potential of college basketball in an expanded regulated betting market."

FanDuel, whose sportsbook at the Meadowlands Racetrack in East Rutherford, near New York City, continues to lead the state in sports betting revenue at more than $32 million this year, said it had the best month any New Jersey operator has had since sports betting began in the state, earning $17.6 million. Monmouth Park Racetrack in Oceanport has made $5.4 million from sports bets so far this year.

PlaySugarhouse saw its active users increase by 40% during the first week of the college basketball tournament compared to the week before, and its March revenue was up 23% compared to February.

Of the nearly $1.1 billion in bets taken by New Jersey sportsbooks so far this year, more than $862,000 were made online. Several other states are struggling with whether to allow online sports betting as part of bills they are considering.

Atlantic City's nine casinos and the two New Jersey racetracks that offer sports betting saw $294 million in casino gambling and sports betting revenue in March, up more than 34% from a year earlier. Only three casinos reported a revenue decline that month, with six showing an increase. Part of the increased total revenue is due to the fact that last March there were only seven casinos operating in Atlantic City, compared with nine now.

The Borgata, as usual, led the pack with $65.7 million in March, up 1.3% from a year ago. The casino had its best March ever in terms of gross slot win ($41.7 million) and net slot win ($35 million), which excludes promotional credits given to gamblers.

Among the two new casinos that opened last June, Hard Rock took in $26.3 million, and the Ocean Casino Resort took in $17.6 million.

The casinos also were aided by more than $39 million in internet winnings, an increase of 53% compared to March 2018. Among internet-only entities, Resorts Digital more than tripled its revenue from a year ago to $15.7 million, and Caesars Interactive-NJ was up 16.4% to $5.1 million.

This story has been corrected to show that the $294 million in revenue was won by the nine casinos and the two horse tracks that offer sports betting, not just the casinos.