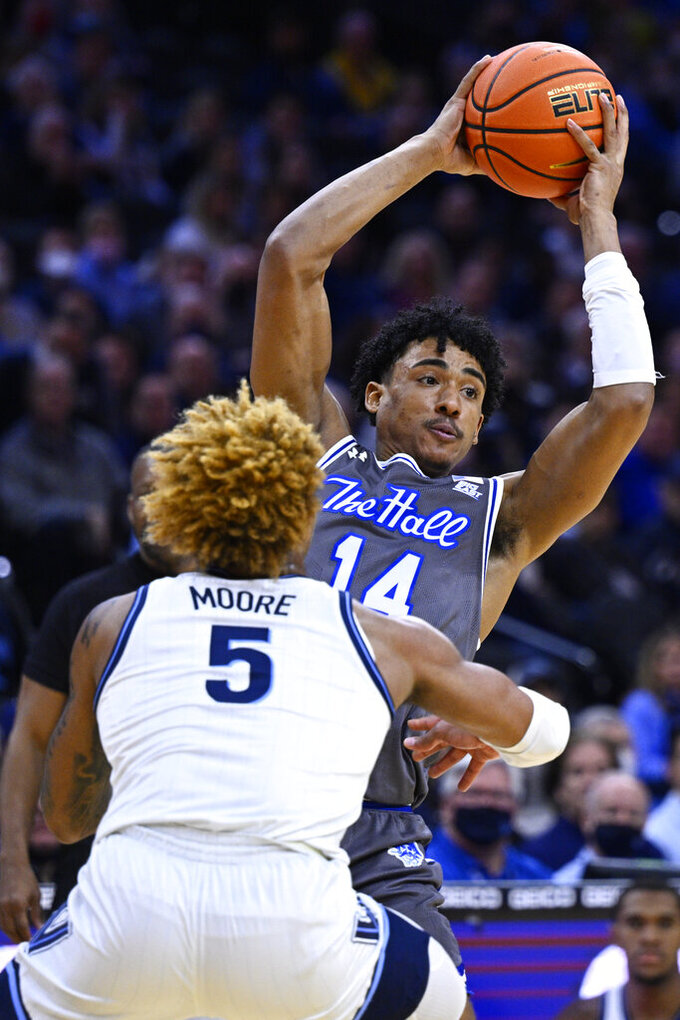 PHILADELPHIA (AP) — Playing on injured ankles that has limited their capabilities, Justin Moore and Collin Gillespie stepped up when Villanova needed them most Saturday afternoon.

Moore scored 14 of his 16 points in the second half while Gillespie grabbed a critical offensive rebound inside the final minute to help the No. 15 Wildcats rally from a seven-point deficit to beat Seton Hall 73-67 Saturday.

“Those two just gutted it out,” Villanova coach Jay Wright said. “And that resulted in a great team effort.”

Jermaine Samuels added 16 points while Brandon Slater had 10 points, including the go ahead layup with 1:26 left to play for the Wildcats (19-6, 12-3 Big East). Gillespie and Eric Dixon each scored 10.

“You just have to grind it out,” said Gillespie, who added four assists dealing with a sprained left ankle suffered against UConn on Feb. 5. “Thank God we did today. But that's how these games go against (Seton Hall)."

Kadary Richmond and Tray Jackson had 16 points apiece for Seton Hall (15-8, 6-7). Myles Cale added 11 and Alex Yetna had 15 rebonds for the Pirates in the see-saw game that was last tied at 67 before Slater's basket.

“If you look at the last seven years against them, it's been a battle,” Seton Hall coach Kevin Willard said. “The amount of respect I have for Gillespie and Samuels is something I've talked about a lot. It is definitely a battle no matter where we play them.”

Richmond had an open look for a three-pointer out of a timeout that rimmed out. Villanova would then keep the ball for the next 45 seconds after Gillespie grabbed an offensive rebound on a missed Caleb Daniels jumper and a Moore 3-pointer was knocked out of bounds by Seton Hall in a scramble.

Moore eventually would hit two free throws to make a 71-67 lead with 16 seconds to play. Richmond would turn the ball over on the following possession with 10 seconds left before Moore hit the final two free throws of the afternoon.

Moore had suffered an ankle injury in Villanova’s loss at Marquette on Feb. 2, missing the game against UConn. He returned with a 16-point effort on Tuesday night against St. John’s. For most of the game, Moore struggled, missing seven of his first eight shots before starting to get into the flow midway through the second half.

“He took advantage of opportunities when they left him open,” Gillespie said. “We practice that every day. And then, he got a couple mismatches inside. Once he gets them, he's a bigger guard so we want him to go to score and be aggressive. And he was.”

The second half developed into a series of runs. After a 9-0 run gave Villanova a 45-41 lead. Seton Hall followed by an 11-0 spurt for a 52-45 lead. The Wildcats answered that run with another 9-0 sprint over three minutes to regain the lead with 7:19 to play. After that point, the lead went back and forth with Richmond and Moore taking starring roles.

Seton Hall: The Pirates need to get Bryce Aiken- who was leading the Big East in scoring- back in the lineup. In the first game against Villanova on Jan. 1, Aiken scored 22 points. However, he hasn’t played since suffering a concussion on Jan. 15 against Marquette. “We obviously miss him, but what are we going to do?" Willard said after the game.

Villanova: The Wildcats hopes for a Big East regular season championship — an eighth one since the conference was realigned in 2013-14 — will depend on how it does in two regular-season games against Providence. The Friars presently hold a two-game lead in the loss column over the Wildcats.

Seton Hall: Travels to No. 24 UConn on Wednesday