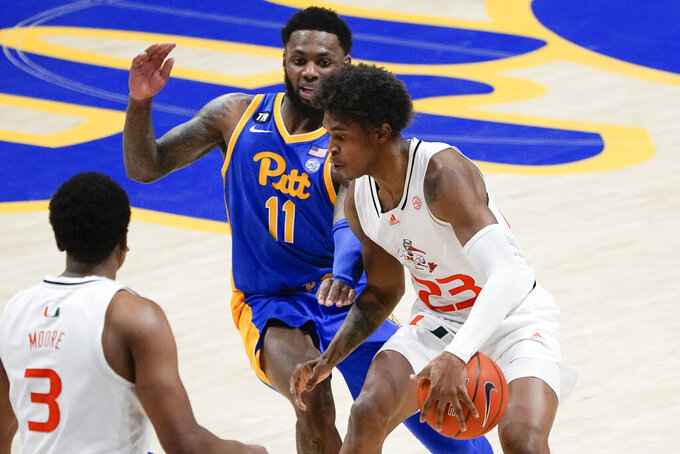 Miami's Kameron McGusty (23) tries to get past Pittsburgh's Jamarius Burton (11) during the second half of an NCAA college basketball game Tuesday, Feb. 22, 2022, in Pittsburgh. (AP Photo/Keith Srakocic)

The Hurricanes are tied with North Carolina for third in the conference standings, a half-game behind Notre Dame and 1 1/2 games behind first-place Duke with less than two weeks left in the regular season. The top four teams earn a double-bye into the quarterfinals of next month's conference tournament.

Moore hit a 3-pointer 29 seconds into the game to open the scoring and Miami led the rest of the way. Waardenburg added a 3 before McGusty, Miller and Wong each scored in the lane to make it 14-2 about 3 1/2 minutes in, and Moore hit a turn-around jumper at the buzzer to give the Hurricanes a 20-point lead at halftime.

Miami had 12 steals — including three apiece by McGusty and Miller —- and scored 30 points off 20 Panthers' turnovers.

Pitt's Mohammed Gueye hit two 3-pointers and scored eight points on 3-of-3 shooting before leaving the game with an apparent hand injury midway through the first half. He returned to start the second half and finished with 11 points, five rebounds, two steals and a block.

Miami returns home to play on Saturday against Virginia Tech. Pitt plays its regular-season home finale when No. 3 Duke visits next Tuesday.