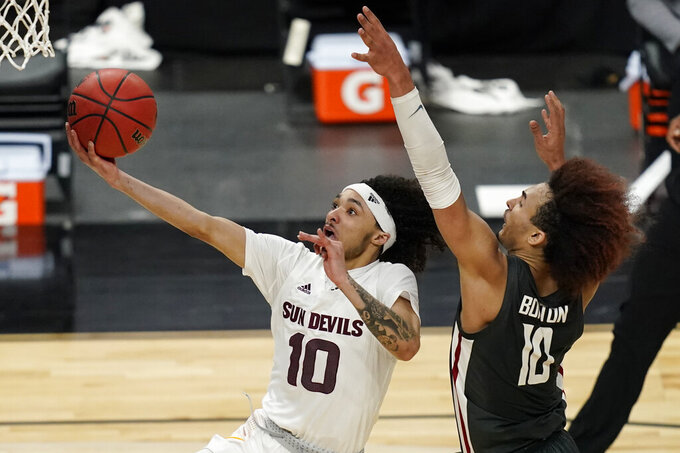 FILE - Arizona State's Jaelen House shoots around Washington State's Isaac Bonton during the second half of an NCAA college basketball game in the first round of the Pac-12 men's tournament on March 10, 2021, in Las Vegas. The relaxed transfer rules approved by the NCAA in the spring has lead to some quick fixes and fast turnarounds for numerous men's basketball programs. Among them are the New Mexico Lobos, who are 4-1 thanks to a foursome of transfers, including House. (AP Photo/John Locher, File)

BOULDER, Colo. (AP) — When Richard Pitino took over the downtrodden University of New Mexico men's basketball program last March at the start of the pandemic, he couldn't hit the recruiting trail to improve a team rich in tradition and light on recent success.

His timing, however, couldn't have been better.

Less than a month after he took the Lobos job, the NCAA approved a plan allowing all college athletes to transfer one time as an undergraduate without having to sit out a season.

“We won six games last year, so we needed to make major changes,” Pitino said after a hard-fought 87-76 loss at Colorado this month. “With COVID, we still weren't able to go on the road recruiting when I first took the job. So, your only real option was the transfer portal."

The one-time exception for athletes to transfer from one Division I school to another had been available to athletes in other college sports for years, but the change in the spring meant it now applied to football, men’s and women’s basketball, men’s ice hockey and baseball.

“I think college basketball, specifically, seismically shifted when they changed the sit-out rule,” Pitino said. “We had a lot of guys transfer and they didn’t have to sit out a year.”

Pitino was one of a handful of coaches who took advantage of the loosened transfer rule by signing several talented transfers who were eligible to compete immediately.

“The goal is not to bring in nine new guys every year,” Pitino said. “But when you take over a program, guys transfer, guys leave, you know, a coach gets fired. Sometimes you just have to do it. It’s just part of the deal, you know? So, that's not what we want to do every year. We got to grow and get these guys better and learn from it.”

Pitino brought Jamal Mashburn Jr., son of 12-year NBA veteran Jamal Mashburn, with him from Minnesota, where he coached for eight seasons. He recruited another son of an NBA player, Jaelen House from Arizona State, whose father, Eddie, played 14 seasons in the NBA.

After going 6-16 overall and 2-15 in the Mountain West Conference, in Paul Weir's last season, the Lobos are off to a 4-1 start under Pitino, their only hiccup that 11-point loss at Colorado that was close until the final minute.

Mashburn said with every game, the chemistry improves among all the new players, including an entirely new starting five.

“When we come in, we’re all ready to work and we all have that same mentality, that same mindset,” Mashburn said. “So, it’s only going to get better from here.”

House said the new guys all hit it off right away.

“I like this group of guys, and I love playing with them,” he said. “And we’ll just keep getting better as the season goes on.”

The Antelopes reloaded after going 17-7 last season and 9-3 in the Western Athletic Conference. They're off to a 4-1 start.

The Aggies were 18-11 overall and 9-8 in the Southeastern Conference last season. They're 6-1 this season.

“Before, you were always a little leery of taking transfers because you just didn't know, was there a character issue or something?” Pitino said. "Now, you can get some really good players in the transfer portal.

“It's drastically changed guys' decisions. They know 'OK, I can move after a year and I don't have to sit out.' Nobody wants to sit out.”