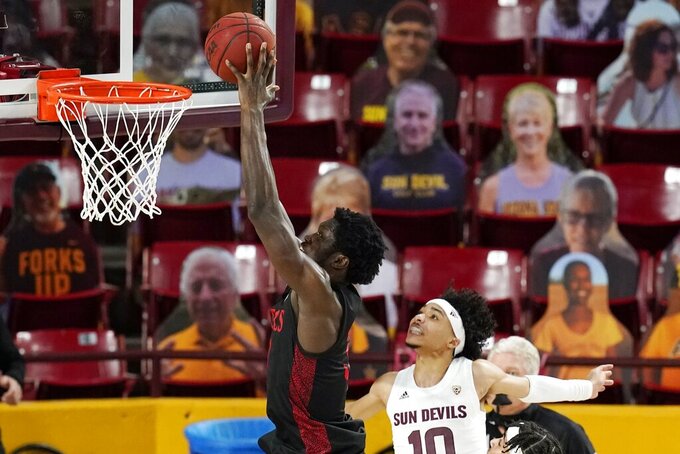 San Diego State forward Nathan Mensah, left, goes in for a dunk as he gets past Arizona State guard Jaelen House (10) during the first half of an NCAA college basketball game Thursday, Dec. 10, 2020, in Tempe, Ariz. (AP Photo/Ross D. Franklin) 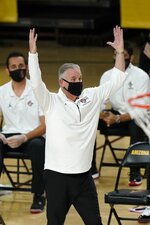 TEMPE, Ariz. (AP) — San Diego State was so worried about Arizona State's fast break, it sent three players back on defense after every miss, leaving its two big men to work the offensive glass.

Two against five turned out to be pretty good odds for the hard-working Aztecs.

“We sent the center and the power forward to the offensive glass and those guys did a great job on their own,” Aztecs coach Brian Dutcher said. “It was a real key to the game.”

The Sun Devils (3-2) got volume-scoring guard Alonzo Verge Jr. back after he missed two games during to COVID-19 contact tracing but were without forward Marcus Bagley due to a lower left leg injury suffered Saturday against Cal.

San Diego State (5-0) already had a size advantage inside, and Bagley's absence turned it into an even bigger strength.

The Aztecs outscored Arizona State 36-9 in the paint and had 17 second-chance points on 11 offensive rebounds against the smaller Sun Devils. San Diego State pulled away with an 18-2 run in the second half to stretch the nation's longest road winning streak to 13 straight games.

“It was probably our closest to a complete game,” said Schakel, who shot 5 of 9 from 3. “We still have a long way to go, but it was nice to put that kind of game together this early in the season.”

The Sun Devils were pushed to the perimeter most of the night by the bigger Aztecs and, despite a couple of nice runs, didn't make enough outside shots. Arizona State shot 34% and missed 11 straight shots during a key stretch in the second half.

The Aztecs were without three players due to contact tracing, though only Keshad Johnson was expected to be part of the rotation.

Bagley's loss was a bigger one for the Sun Devils, leaving them without their top rebounder.

San Diego State took advantage, scoring 12 points off six offensive rebounds midway through the first half. The 6-10 Mensah had his way inside with 10 points and 10 rebounds in the first half to give the Aztecs a 35-33 lead.

Arizona State missed 11 of its first 15 shots before finding a better offensive rhythm and cleaned up the defensive glass better to rally from an early 12-point deficit.

The Sun Devils struggled against San Diego State's defensive pressure early in the second half and began turning the ball over, leading to a series of transition baskets during a 13-0 Aztecs run.

Arizona State had a stretch of eight minutes without a field goal as San Diego State extended the lead to 59-45.

“It was a combination of poor shot selection, careless turnovers, bad transition defense after mistakes,” Hurley said. “We were still up two, 43-41, with 15 minutes left with all the things that I witnessed and we found a way to do worse than that, which is scary.”

San Diego State won its 17th straight nonconference game behind a big night by Schakel and a dominant performance inside.

Arizona State already lacks size inside and missing Bagley really hurt, particularly when the shots weren't falling in the second half.

San Diego State entered the AP Top 25 for the first time this season and could climb considerably with a win over BYU this weekend. Even with a win over Grand Canyon on Sunday, Arizona State could end up dropping out of the poll after being manhandled by the Aztecs inside.

Arizona State point guard Remy Martin didn't take his first shot until the 5:14 mark of the first half — a made 3-pointer — and wasn't much of a factor. The preseason AP All-American finished with nine points on 2-of-8 shooting with five rebounds and three assists.

“He had a little bit of a blank look on him, wasn't having that fire, that energy I'm used to seeing from Remy,” Hurley said. “Overall, he's got to play better in these games, games like this where he's had a history of playing well.”