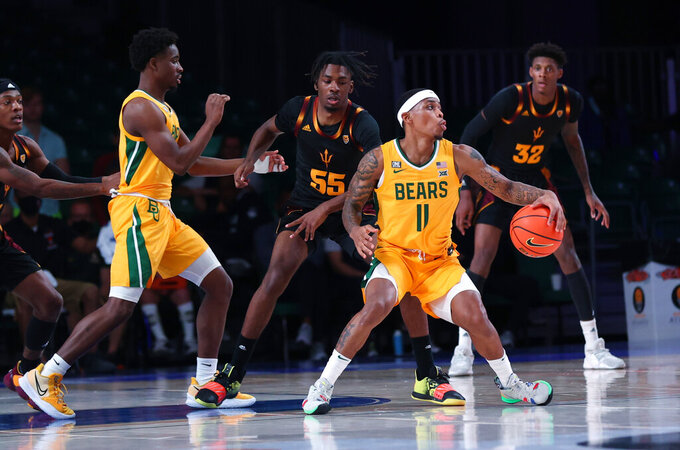 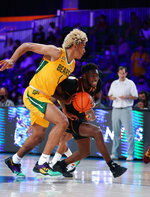 The sixth-ranked Bears had five players score in double figures in their 75-63 win over Arizona State on Wednesday night that wrapped up first-round play at the Battle 4 Atlantis. L.J. Cryer led that group with 15 points, marking the fifth time in as many games that the Bears have had at least four double-figure scorers.

“It's definitely beautiful," said Adam Flagler, who had 13 points. “We're always just trying to play for each other, trying to get the best shot always down the floor, and go 1-0.”

So far, that plan has worked for a team charged with replacing four starters from last year's national championship squad. That group was led primarily by three lead scorers in Jared Butler (16.7 points), MaCio Teague (15.9) and Davion Mitchell (14.0).

Coming in, Cryer was averaging a team-high 18.5 points while four other players were averaging at least 10.3 points. The Bears (5-0) nearly had a sixth double-figure scorer in James Akinjo, who finished with nine points and seven assists.

“It's critical because every game is not going to be your night,” Drew said, adding: “On nights that aren't your shooting night, it's great to have others you can depend on and go to. That's the great thing about having a great rotation, a great bench. We go to the bench, and we normally get better.”

D.J. Horne scored 20 points to lead the Sun Devils (2-3), including a jumper and a pair of 3-pointers in the opening 2 1/2 minutes. Arizona State led by six early and was tied with 8 1/2 minutes left in the half, only to see Baylor put together a 19-4 burst — highlighted by 3s from Akinjo, Flagler and freshman Kendall Brown — to take a 42-27 lead.

That lead grew to 22 points, and the Sun Devils never got within single digits again.

While knocking down shots against Baylor's defense was a challenge, Arizona State didn't help itself with 15 turnovers. Eleven of those came in the opening half to help Baylor build its lead, leading to a dozen points, after Arizona State had averaged 11 turnovers over its last three games.

“That hurt us,” Sun Devils coach Bobby Hurley said. “We knew coming in we couldn't allow our offense to help them generate points. And we did that a little bit too much.”

Arizona State: It's been a bumpy start for the Sun Devils, with two early losses by a combined three points. They lost a game on a three-quarter-court heave to UC Riverside on Nov. 11, followed by a defeat at San Diego State on Saturday. And sophomore Marcus Bagley (10.0 points) didn't travel to The Bahamas due to a lingering knee issue. Arizona State was trying for its first win against a ranked nonconference opponent since beating top-ranked Kansas in December 2018.

Baylor: The Bears are back in the tournament for the first time since winning it in 2016 and boast a reshaped lineup after losing four starters, including Mitchell as the No. 9 overall NBA draft pick. Coming off Saturday's blowout win against Stanford, they had relatively little trouble stretching out the lead on another Pac-12 team.

“Really it’s hard to knock any one area for them and see a weakness that’s pretty obvious," Hurley said.

Flagler, a junior guard, missed the Stanford game with a hand injury. He played this one with tape around his left wrist and thumb, along with his ring and pinky fingers taped together. Flagler said afterward the tape was precautionary.