No. 6 Villanova tops Syracuse 67-53 with Baylor on deck 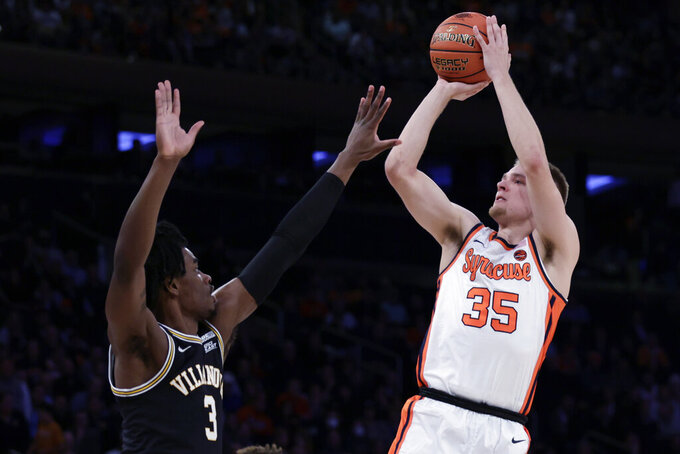 NEW YORK (AP) — Jay Wright spotted the fans in orange wigs and heard the dueling chants for Syracuse and Villanova the moment he stepped on the Garden court.

For a Big East fan himself, the Wildcats coach felt the buzz in the stands with the dormant rivalry renewed.

“Did you feel the energy in there,” Wright asked guard Justin Moore.

“It was cool, right," Wright asked.

Cool as could be for the Wildcats. Moore scored 18 points, Collin Gillespie had 14 and No. 6 Villanova beat Syracuse 67-53 in the Jimmy V Classic on Tuesday night.

Gillespie made the play of the game when he picked off a late Syracuse pass and hit a bounce pass to a streaking Samuels for the one-handed jam down the lane and a 10-point lead that sent the crowd into a frenzy.

“I saw it developing because I’ve seen Colin do it many times before,” Samuels said.

“I think they’re one of the best teams in the country and we’re not,” coach Jim Boeheim said. “I think we’re going to continue to get better. But right now, we’re not good enough.”

The former conference rivals -- the Orange are in the ACC -- went shot-for-shot most of the way in a slugfest worthy of the 11 Big East Tournament games they played at the Garden.

Gillespie and Moore hit back-to-back 3s late that pushed Villanova to a four-point lead and gave it some needed breathing room. Samuels found room at the top of the arc for a 3 that capped a 12-2 run and helped the Wildcats break loose.

The Wildcats also had a 57-36 edge on the boards and scored 25 second-chance points.

Hard to believe, the rivals hadn’t played each other since 2014, a year after Syracuse’s last win in the series. Wright has long admired Boeheim and said this week he can’t believe the Syracuse stalwart is still on the bench at age 77.

But times change and Wright and the Wildcats won two national championships (2016 and 2018) while the series was paused.

Syracuse was the latest tough out for the Wildcats in a schedule frontloaded with hoops heavyweights. Villanova already lost to No. 1 Purdue and No. 4 UCLA and beat No. 13 Tennessee.

Up next, a rematch Sunday with national champion Baylor, who knocked off Villanova 62-51 to reach the Elite Eight in the 2021 NCAA tournament.

The Garden wasn’t quite sold out for this one -- though roughly 14,344 on a weeknight is a pretty nice crowd -- and Orange fans seemed to outnumber Villanova. The early edge went to Syracuse on the court, too.

Syracuse and Villanova shook the crowd early trying to turn the game into a 3-point contest. One problem: Neither team sank them. The Wildcats took 24 3-point attempts on their first 29 shots and missed about all of them. Syracuse hit 3s on their last two baskets and went into the half with a 29-26 lead.

“I think we're getting a lot better,” Boeheim said. “If we played Villanova two, three weeks ago, we would have had 15 at halftime.”

Syracuse: Is holding tight after it lost a lot from last year’s team, which finished 18-10 overall and 9-7 in the Atlantic Coast Conference but made a surprising run to the round of 16 in the NCAA tournament.

Villanova: Can’t go cold against Baylor like it did during March Madness. Baylor held Villanova to 37.5% shooting in the second half and 0 for 9 from 3. The Wildcats scored 10 points over the final 11 minutes. Gillespie missed the game (and the entire postseason) with a torn MCL in his left knee.

Cole Swider played three seasons at Villanova before he transferred to Syracuse. He averaged 13.1 points and had only five at MSG.

Villanova: At No. 2 Baylor on Sunday.