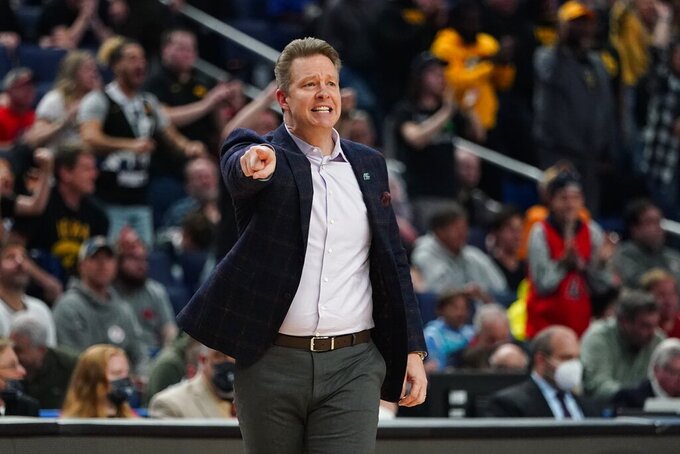 Richmond head coach Chris Mooney reacts in the second half of a college basketball game against Iowa during the first round of the NCAA men's tournament Thursday, March 17, 2022, in Buffalo, N.Y. (AP Photo/Frank Franklin II)

BUFFALO, N.Y. (AP) — For college basketball fans of a certain age, hearing the term “Princeton offense” conjures up memories of backdoor cuts, NCAA Tournament drama and a coaching genius in a frumpy sweater.

The Princeton offense is no longer a closely guarded secret used by a just a few of the mastermind's proteges.

“My college coach, Pete Carril, I feel like he was 60 years ahead of his time because now it’s much more common,” Richmond coach Chris Mooney said Friday.

Mooney's 12th-seeded Spiders will face Providence on Saturday in the second round in the Midwest Region, trying to follow up their upset of Big Ten Tournament champion Iowa with a victory against the Big East's regular-season champ.

In 1989, Princeton nearly became the first 16 seed to upset a No. 1 in the NCAA Tournament, 29 years before UMBC finally did it against Virginia. Alonzo Mourning and Georgetown escaped Princeton's surgical slow-down by a single point.

Defending NCAA champion UCLA was not so fortunate in 1996, falling to Princeton in the first round on a late layup by Gabe Lewullis, who got free on one of the offense's signature backdoor cuts.

From the Golden State Warriors to the Division III Nebraska Wesleyan Prairie Wolves, elements of the Princeton offense are everywhere now.

Richmond runs it closest to its purest form. The offense stresses spacing and cutting over ball screens. All five players need to be able to handle the ball and play on the perimeter, though much of the offense flows through the post.

“It’s kind of an intricate system that runs some different actions. That uses the post effectively, whether it’s low post or high post, and it uses post splits and cutting and backdoor cut off of reads,” ESPN analyst Jay Bilas said.

When the Princeton offense is run well it can look like a perfectly choreographed Broadway musical, with all five players moving at once and putting defenders into conflict.

“It’s not necessarily an offense per se as much as it is a way of playing and making decisions,” Mooney said. “The players make all of the decisions. The more quickly you make them and the more soundly you make them, the better you are at it. If you have a feel for the game, it’s pretty easy.”

The offense can be difficult to master in college basketball where players come and go quickly.

“When we started running our offense, it started with me figuring out where to go. I didn’t have too hard a time picking up with it, but I watched a lot of film, studied it a lot, and I think we did a pretty good job at figuring out how to run it," the 5-foot-9 point guard said.

Providence coach Ed Cooley said the way to defend the scheme is to keep it simple.

Bilas said teams facing the Princeton offense can become too focused on guarding the backdoor.

“What you have to do is take away their 3s,” he said. “Those backdoors tend to soften up your defense and then you’re giving up open 3s.”

Carril, who could give off mad scientist with his messy gray hair, loose-fitting sweater and big-framed eye glasses, was famously coy about his offense. Sure, opponents could dissect it on tape, but he wouldn't explain the intricacies in public.

Carril became an assistant coach for the Sacramento Kings after his time at Princeton. Between that and his former players becoming coaches, the secrets spread. Now 91, Carril is retired and his offense is everywhere.

“Nobody from us calls it the Princeton offense," Mooney said. "So I think that it’s popular enough or common enough that it’s just basketball.”

Ninth-seeded Creighton will go into its second-round Midwest Region game against top-seed Kansas in Fort Worth, Texas, without two of its best players.

Ryan Kalkbrenner, the Big East’s defensive player of the year, will miss the rest of the tournament after injuring his left knee during the Bluejays’ overtime victory against San Diego State on Thursday.

Creighton was already playing without point guard Ryan Nembhard, the Big East freshman of the year who injured his wrist Feb. 23 and required season-ending surgery.

Coach Greg McDermott said Kalkbrenner’s injury wasn’t as significant as had been feared and he won’t need surgery. Kalkbrenner had 16 points and 10 rebounds before getting hurt in overtime.

Without him, Creighton will turn to McNeese State transfer Keyshawn Feazell to play more minutes.

“Well, I’ve played 40 minutes in a game a few times, last year at McNeese,” Feazell said. “I’ve been trying to stay in shape just in case something like this was to happen. So I’m prepared to play as many minutes as possible.”

The 7-foot Kalkbrenner was second in the Big East with 2.3 blocks per game.

“Keyshawn’s skill set is different than Ryan’s,” McDermott said. “Ryan’s not only the best on our team at protecting the rim, he’s one of the best in the country.

“So to think that anybody’s going to go into that role and it’s going to look the same would not be fair to Keyshawn. We’re going to have change as the game goes on and we see what Kansas is trying to do to exploit what we’re doing in our coverages.”

Jayhawks coach Bill Self said not having Kalkbrenner changes Creighton.

“But the guy they bring in behind him is probably a superior and natural athlete,” Self said of Feazell. “He’s very capable. He doesn’t score the ball like Ryan has scored it, but he hasn’t had the same opportunities that Ryan has had.”

The Jayhawks have lost in the second round of the last two NCAA Tournaments.