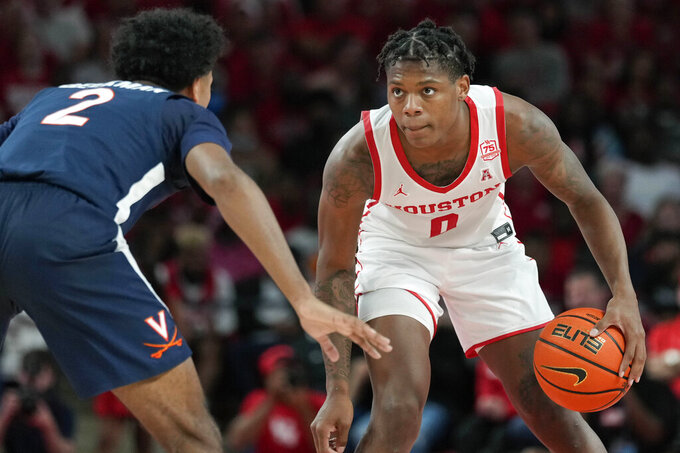 “We had a good plan,” Houston coach Kelvin Sampson said. “Our kids really executed it. Fabian (White Jr.) on defense and rebounding and Marcus on offense. ... We were really good playing inside-out. Virginia is long with their 7-footers, but I thought our kids did well with their escape dribbles and got it reversed then we attacked on the weak side.”

Houston forced Virginia into 17 turnovers, which the Cougars turned into 16 points. Houston held the Cavaliers to 35% shooting and 4 of 19 on 3-pointers.

“We take shooters away,” Sampson said. “You can’t be democratic in your effort when you’re guarding shooters, you have to have a purpose. You have to make shooters drivers.”

“I think the first half they had 14 points off our turnovers,” Bennett said. “We always talk about this, and maybe it sounds like a broken record to our players, but before you can be competitive, you have to eliminate losing. ... To give up 14 points, we needed to take care of the ball.”

Armaan Franklin scored 11 points, Kihei Clark had eight points and six rebounds, and Kody Stattmann added eight points for Virginia, which dropped to 1-2 for the first time since the 2012-13 season. Jayden Gardner, who entered averaging 18 points per game, was held to four points.

Bennett said his team has to go through these struggles and benefits from playing against teams as tough as Houston.

“We’re a newer team,” Bennett said. “We have a ways to go, and I think it’s important for us to be in this setting. Now, we will look at the areas we really have to address, and hopefully, move the needle, getting better and better. Taking care of the ball, handling things.”

Houston, which never trailed, jumped out to a 14-2 lead in the first 4 1/2 minutes capped by a 3-pointer from Sasser.

After Virginia cut the lead to 24-16 on a 3-pointer by Stattmann midway through the first half, Houston went on an 8-0 spurt to open up a 16-point lead on another 3-pointer by Sasser with six minutes to go in the half.

The Cougars led 36-23 at the half, and Virginia never got closer than 11 in the second half.

Virginia: The Cavaliers missed a chance for a quality win early in the season after falling to Navy last week. Turnovers continue to plague the Cavaliers, who are averaging 16 giveaways per game.

Houston: The Cougars picked up what should be a quality win and extended their home winning streak to 28 games. Houston finished with 12 steals and four blocks and held a 16-4 advantage in fast-break points.

“Maybe we will play some teams as good defensively. I don’t know if we will play many better than this team because they are special that way. They’re just good all around.” — Bennett on Houston.

Houston: Faces Butler on Monday in the Maui Invitational in Las Vegas.