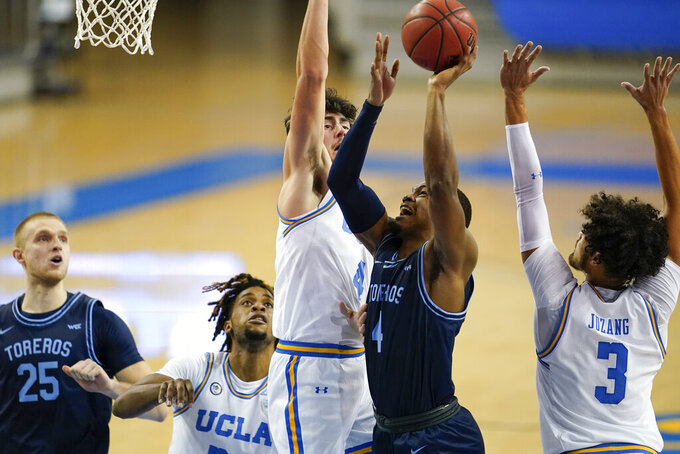 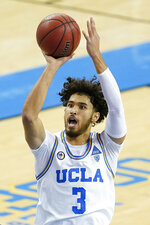 LOS ANGELES (AP) — Johnny Juzang unleashed a 3-pointer midway through the first half of his first game with UCLA. Relief washed over him as it dropped in.

The Kentucky transfer scored 10 points in 19 minutes of the Bruins' 83-56 victory over San Diego on Wednesday night, nine months after he played his last game for the Wildcats. The guard from nearby Tarzana is back home and feeling at home in Westwood.

“It’s been a long time, a lot of training, a lot of pickup games, nothing real,” Juzang said. “To get out there and when the shot went in, it was like ‘Ahh.’ It felt great, man. I've been waiting for it."

Juzang's debut had been delayed because of a stress reaction in his right foot.

“I felt great with my conditioning and my foot, so I’m grateful for that,” he said. “I was just excited to be out there.”

The Bruins (4-1) have bounced back since a season-opening loss to San Diego State. Juzang's presence gives them another scorer.

“He's such a weapon with his ability to put it in the basket, so it opens up the floor for a Chris Smith or Jaime to score,” UCLA coach Mick Cronin said. “You have to guard him at all times; he’s a tremendous offensive weapon.”

The Toreros (0-1) finally got their season underway two weeks after most other schools. They had to halt activities for 14 days after a positive COVID-19 test in the program.

“The most frustrating thing about the game was the first time we uttered the four letters U-C-L-A, the second thing we talked about was rebounding,” Toreros coach Sam Scholl said. “You just can’t give up 16 offensive rebounds and expect to win.”

Perhaps fueled by pent-up energy, San Diego came out of the gate strongly. The Toreros led by five points in the first few minutes and were up by two when Juzang entered the game.

His 3-pointer launched a 16-1 run that helped UCLA to a 28-15 lead. Cody Riley and Jake Kyman chipped in four points each. Defensively, the Bruins were disruptive, forcing the Toreros to miss nine straight shots. San Diego shot 26% from the floor in the half.

“We’re all excited to have him back in the mix,” Jaquez Jr. said of Juzang. “It was great to see him get his first points at UCLA. He fits in well, coming off screens and playing defense with us.”

Overall, the Bruins outscored San Diego 21-9 during the last 10 minutes of the half to lead 33-23 at the break.

The Toreros didn't get closer than seven points early in the second half, when the Bruins scored 50 points. Down by 20, Calcaterra hit three straight 3-pointers and made a pair of free throws. But the Bruins answered with three 3-pointers of their own during the same stretch to go back up by 20. Campbell had a 3, followed by a pair from Jaquez Jr.

UCLA: Riding a four-game winning streak, the Bruins will be looking to notch quality wins in their next two games against Marquette and Kentucky. They'll meet the Wildcats on a neutral court in Cleveland. Kentucky dropped out of the Top 25 this week and is off to a poor start. But a pair of wins would give the Bruins a big dose of confidence going into the resumption of Pac-12 play on the road.

The Bruins typically trot over to exchange fist or elbow bumps with the referees during introductions. They didn’t do that this game; instead, the players raised their arms in acknowledgement from a distance. Los Angeles County is currently under a three-week stay-home order with COVID-19 cases surging and hospitals overwhelmed.

The ball got away from UCLA’s Cody Riley during warm-ups and bounced over to the first row of seats on the baseline, knocking over a cardboard cutout. He picked up the fake fan and set it upright before retrieving the ball.

San Diego: Hosts Cal State Fullerton on Friday in its home opener. It was originally supposed to be played during the Toreros' 14-day stoppage.

UCLA: Hosts Marquette on Friday. The Golden Eagles have won four of five, including an upset of then-No. 4 Wisconsin.