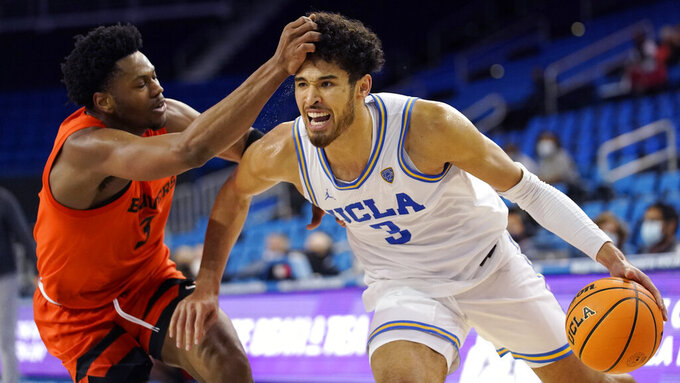 UCLA guard Johnny Juzang took a big star turn at the NCAA Tournament last spring, shooting the Bruins into the Final Four with a string of incredible performances.

The run heaped the hype onto the high-scoring guard heading into his junior season, not that he was listening to any of it.

"I've always been internal, so whether it's external praise or criticism, it's in one ear and out the other — or not in the ear at all," Juzang said. “That's a big part of it, but also staying present, taking it day by day, just focus on growing and getting better, and everything will take care of itself.”

A four-star recruit from Harvard-Westlake School in Los Angeles, Juzang started his college career at Kentucky before transferring to UCLA. He had a solid regular season in 2020-21, averaging 14 points per game, before going on a tear in the NCAA Tournament.

Juzang had 23 points in the first round against Michigan State and followed up with 27 against BYU. He was at his best in the biggest games, scoring 28 against Michigan in the Elite Eight and 29 to carry UCLA against Gonzaga in the Final Four.

The Bruins came up just short when Gonzaga's Jalen Suggs hit a running 3 at the buzzer, but the run boosted Juzang's NBA draft stock.

Juzang declared for the 2021 NBA draft before opting to return to the No. 9 Bruins, making them one of the favorites to return to the Final Four. He leads them with 17.2 points per game while grabbing 5.1 rebounds on a team that's been in the top 10 all season.

STRENGTHS: Superb shooter and scorer with a knack for making plays in the clutch. Excellent catch-and-shoot player, but can also create shots for himself. Loves the challenge of playing under the brightest spotlights.

WEAKNESSES: Lacks elite athleticism, which could hurt him when driving to the basket in the NBA. Could use work on his passing — 1.9 assists per game — and sometimes becomes too reliant on his jumper. An able individual defender, but not consistently.

Other NBA prospects to watch in the Pac-12:

JABARI WALKER: Colorado's 6-9 sophomore can be a good outside shooter despite struggling this season (24% from 3) and has a sharp basketball IQ. The son of former NBA player Samaki Walker is averaging 13 points and 8.5 rebounds this season.

ISAIAH MOBLEY: The Southern California big man lacks the athleticism of his brother, Cleveland Cavaliers forward Evan Mobley, but makes up for it with smarts and a soft touch. The 6-10 junior is averaging 15.3 points and 9.2 rebounds this season.

MARCUS BAGLEY: Arizona State's 6-8 sophomore has struggled with injuries — he's played three games due to a knee injury this season — but has the type of game that could translate at the next level. Bagley, whose brother Marvin plays for the Sacramento Kings, is an excellent outside shooter who can stretch defenses and is an adept rebounder.