UNC's Bacot leaves no suspense on his title-game status 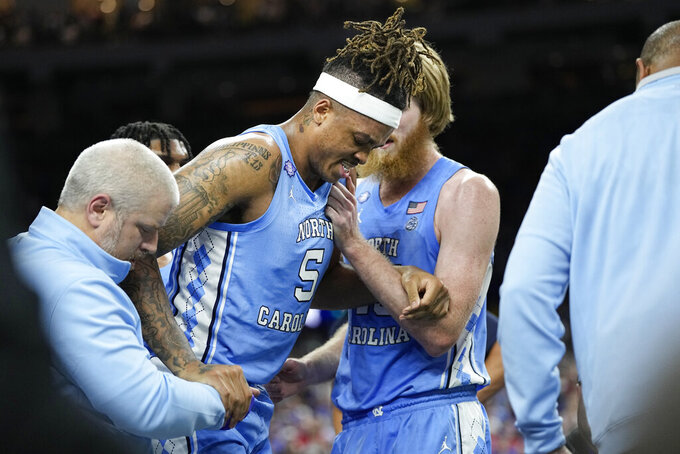 North Carolina forward Armando Bacot is helped off the court during the second half of a college basketball game against Duke in the semifinal round of the Men's Final Four NCAA tournament, Saturday, April 2, 2022, in New Orleans. (AP Photo/David J. Phillip)

NEW ORLEANS (AP) — North Carolina front-court starter Armando Bacot didn't so much down-play the severity of his right ankle injury as dismiss the notion that it would stop him from playing hard against Kansas in Monday night's national championship game.

“I'm going to go all out,” the 6-foot-10 Bacot pledged on Sunday before the Tar Heels' final practice at the NCAA Tournament. “It's the championship game, so I'm going to play my best and I'm going to go out there and fight.”

Tar Heels coach Hubert Davis said Bacot, who twisted his ankle in a crowd of players near the baseline during the second half of Saturday night's national semifinal victory over Duke, was slated to participate in a light practice later Sunday after X-rays came back negative.

“Obviously he’s a little sore. But he was walking around and feeling good and was very encouraged with the amount of swelling from his ankle sprain,” Davis said. "He’s ready to play tomorrow night.

UNC guard Caleb Love said Bacot all but assured teammates after Saturday night's game that he was playing and that there would be no “day-to-day” suspense or game-time decision.

“He told us he didn't have a choice but to play,” Love said. “That goes to show you how tough he is. Armando's one of the toughest dude's I know. He'll put his life on the line for this game. So, I feel like he's ready and we're going to pick him up.”

For Davis, Bacot's insistence on playing is a welcome development. He averages 16.3 points, 13.1 rebounds and 1.7 blocks per game.

“It’s just plain and simple,” Davis said. “We’re a better team with him on the floor.”

Kansas forward Mitch Lightfoot was almost 11 years old when he was ordered by his parents to go to bed at halftime of the Jayhawks' last triumphant national title game against Memphis in 2008.

“That’s something that I still give them trouble for,” said Lightfoot, a sixth-year senior who was born in Kansas City and lived there until age 5 before moving to Arizona.

He joked that he'd be getting his revenge on Monday night, when Kansas seeks its fourth NCAA title in its matchup with North Carolina in the Superdome.

“They’re actually here for this one,” Lightfoot said of his parents. "So, I told them they have to go home at halftime.”

Jayhawks guard Christian Braun, a junior from Burlington, Kansas, also missed the second half of that 2008 title game. He was almost 7 years old and tried to watch the game, but fell asleep by halftime.

In Chapel Hill, North Carolina, authorities should be well prepared for wild street celebrations to break out — bonfire and all — should the Tar Heels knock of Kansas.

“I kind of wished I was back at Chapel Hill,” Love said after seeing footage of celebrations near campus. “It was great to see ... that we create memories for the students back at home.”

Many fans congregated outside a stretch of bars and restaurants at the intersection of Franklin and Columbia streets, along the edge of campus, where some of them built and ignited a bonfire.

Some of those revelers climbed lights poles and trees, while others shot off fireworks.

“I was kind of jealous because I got 20 or 30 Snapchats of people rushing Franklin and all the parties and stuff that was going on at school,” Bacot said, referring to videos posted on social media. “We play in these big games and obviously we're a huge factor in what has happened, but I'm just happy for all the students and all my friends that get this experience. ... Hopefully, we can get this win on Monday and it'll be another party on Franklin Street.”

“The NBA congratulates Mike Krzyzewski on his record-setting coaching career," Silver said. "In 42 years as head coach at Duke and more than a decade as a head coach for USA Basketball, his leadership and mentoring have had a profound impact on countless NBA players, coaches and executives, including me. We thank Coach K for all that he has done for the game of basketball.”

CBS announced that the historic first matchup of arch in-state rivals Duke and North Carolina in the NCAA Tournament, buoyed further by the Krzyzewski storyline, was the most-viewed NCAA Men’s Final Four telecast on any network since North Carolina beat Oregon in the 2017 semifinals on its way to the national title.

The UNC-Duke game had an average of 16.3 million viewers, the network said.

CBS said the first semifinal game, in which Kansas beat Villanova, had an average audience of 10.3 million viewers.