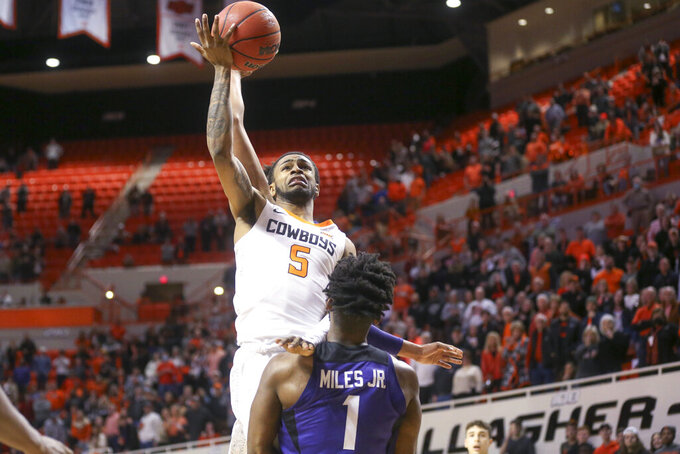 Oklahoma State guard Rondel Walker (5) is fouled by TCU guard Mike Miles (1) while going up for a shot during the second half of an NCAA college basketball game in Stillwater, Okla., Wednesday, Jan. 19, 2022. Walker made two free throws. (Ian Maule/Tulsa World via AP)

Tyreek Smith grabbed an offensive rebound, was fouled, and sank two foul shots to pull the Cowboys within four points and Keylan Boone grabbed his own missed 3 and fed Walker for a 3-pointer that pulled OSU within 56-55. Smith blocked a layup try by Jokobe Coles and Walker grabbed the rebound. Walker was fouled by Mike Miles, sank both free throws and then watched TCU's Damion Baugh miss a 3-pointer off the back iron at the buzzer.

OSU snapped a two-game skid against TCU and leads the all-time series 28-11.