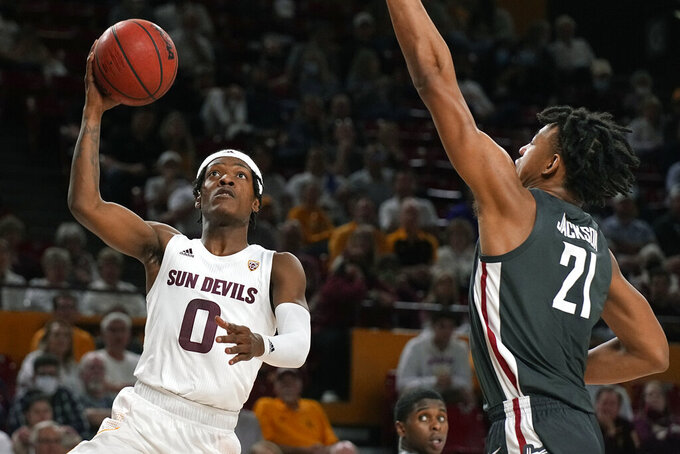 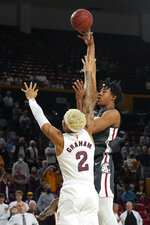 TEMPE, Ariz. (AP) — Washington State sputtered through an awful first half on offense, shots bouncing away — if they hit anything at all — passes sailing into the stands.

Coach Kyle Smith had a simple message through the offensive abomination: keep playing defense and rebounding.

The Cougars did, giving them an eight-point halftime lead despite going 11 scoreless minutes. Then the shots started to fall, at least a little.

Noah Williams returned from a neck injury to score 14 points and Washington State held Arizona State to its fewest points in 75 years with a 51-29 win Wednesday night.

“It was obviously an odd game, based on the texts I received from friends and family,” Smith said. “What a defensive effort. Didn't expect that at all, so really pleased.”

Arizona State played without forward Marcus Bagley (knee) for the fifth straight game, but it may not have mattered who was on the court.

The Sun Devils (2-6, 0-1 Pac-12) exasperated coach Bobby Hurley and had the fans booing most of the night with an unseemly display of one-on-one offense.

Arizona State had 10 points at halftime, shot 21% and went 3 for 26 from the 3-point arc in one of their worst offensive performances under Hurley. DJ Horne had 12 points to lead the Sun Devils, who even struggled on free throws, going 2 for 8.

Arizona State finished with its fewest points since its season finale in 1946.

“It was disappointing for us on offense,” Hurley said. “I've had a lot of teams here that could put some points on the board and tonight was as ineffective offensive performance that I've been a part of ever, as a player or a coach. It was epically bad.”

Arizona State was coming off a difficult trip to the Bahamas, capped by a 77-59 loss to Loyola Chicago to go 0-3 at the Battle 4 Atlantis.

Even so, no one could have predicted the offensive ineptitude on display at Desert Financial Arena Wednesday night.

Trading clanks, air balls and fumbled dribbles, the Sun Devils and Cougars had fans groaning in disgust throughout the first half.

“We were tight,” Smith said. “We sustained it by guarding them right back.”

Arizona State had no answer for their pressure.

The Sun Devils had to force up numerous shots late in the shot clock and many of their possessions were relegated to one-on-one offense.

Arizona State missed nine of its first 10 shots and kept misfiring, going 4 for 24 overall, 2 for 15 from 3. The Sun Devils heard a sarcastic cheer from their fans after hitting their second shot of the half and didn't crack double figures scoring until the 4:56 mark.

“Guys not hitting shots right now that we usually hit, easy shots that we're not hitting right now, I think guys are starting to get in their head about that,” said Arizona State's Marreon Jackson, who had two points on 1-of-10 shooting.

How bad was the first half? Washington State’s Williams hit the first free throw in 12 combined attempts with 1:55 left. The teams went 2 for 13 from the line and split their 18 combined turnovers.

Washington State found an offensive rhythm of sorts in the second half. Arizona State did not.

The Cougars scored eight straight points during a 14-2 run to go up 37-16 and the Sun Devils kept clanging to spoil any hope of a comeback. Arizona State shot 1 of 11 from 3 in the second half.

“The play sheet got a lot of work today,” Hurley said. “We tried a lot of things, but nothing really worked effectively.”

Washington State had its struggles on offense, causing Smith to throw up his arms numerous times. The Cougars got into a better offensive rhythm in the second half and helped play a role in Arizona State's poor shooting with their defense.

Arizona State needs a lot of work on offense. A LOT.