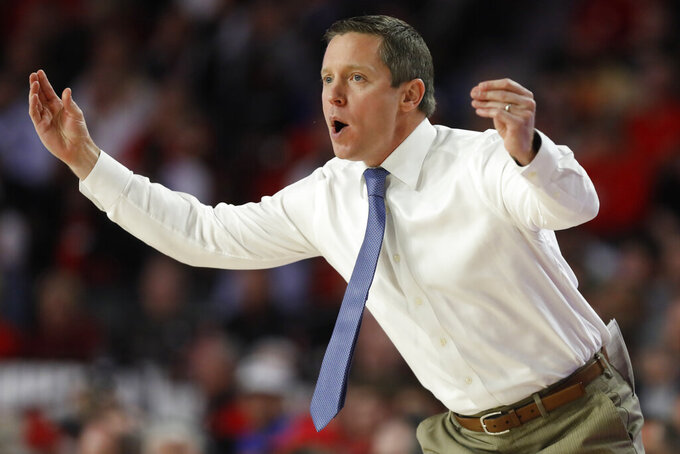 FILE - In this March 4, 2020, file photo, Florida coach Mike White gestures during an NCAA college basketball game against Georgia in Athens, Ga. Unlike a year ago, Florida begins the season unranked and won’t have nearly as much hype. (Joshua L. Jones/Athens Banner-Herald via AP, File) 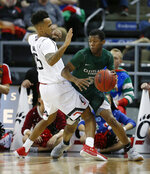 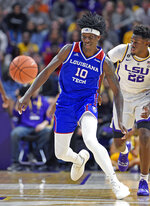 It’s White’s way of trying to keep his players better focused and more grounded after a year in which they struggled to handle a top-10 preseason ranking and lofty expectations that had some college basketball pundits picking the Gators to reach the Final Four.

Players seemed more concerned with points, minutes and NBA draft stock than passing, rebounding and defending. Florida was talented enough to overcome some of its culture and chemistry issues and go 19-12 (11-7 Southeastern Conference) before the coronavirus pandemic halted postseason play.

White wasted little time in hitting the reset button and went to work trying to build “a championship-level culture.”

“We’re fighting every day for our culture because it means a lot,” White said. “It’s worth a lot in the win-loss column and the development of your team throughout the season.”

The Gators open Nov. 25 against Maine at a resort casino on tribal land in Connecticut. They face No. 4 Virginia two days later and have early season road games scheduled against Oklahoma (Dec. 2) and 21st-ranked Florida State (Dec. 12).

Unlike a year ago, Florida begins the season unranked and won’t have nearly as much hype even though they return seven of their top nine scorers and add four transfers: Tyree Appleby (Cleveland State), Colin Castleton (Michigan), Anthony Duruji (Louisiana Tech) and Osayi Osifo (Eastern Florida).

“We can’t let nobody from outside tell us what we are capable of,” center Omar Payne said.

Point guard Andrew Nembhard and center Kerry Blackshear Jr., two of the slowest guys on the roster, are gone. Their departures allowed White to install a more up-tempo offense and a full-court, pressing defense — looking for easy buckets on one end and difficult shots on the other.

As important as finding the perfect style fit for his team, White believes getting the locker room in order could have an even bigger impact.

He started giving weekly “culture quizzes” this summer, with each player needing to get a perfect score to get a practice jersey. Gratitude, loyalty and truth are among the words the Gators have to know inside and out.

“We’re in a better place in that regard right now,” White said. “But we all know in this thing, in this crazy sport, on November 25th we’re going to name five starters. And how do six through 13, through 15, how do they respond? That following game on the 27th, who starts? The other guys, how do they respond?

“Five games in, our fourth-leading scorer, is he more concerned with being our first-leading or second-leading scorer, or how many minutes he’s playing or whether or not he’s doing everything he can do to help the Gators win? Those are all the things that we’ve got to do a better job of controlling if we’re going to be a championship-level team.”

Some other things to know as the Gators enter White’s sixth season:

Florida has been a popular landing spot for transfers and has its biggest crop to date. Appleby, Castleton, Duruji and Osifo bring experience and give the Gators their most depth under White.

Appleby, Tre Mann and Ques Glover will share time at point guard. Duruji's athleticism should fit nicely in the up-tempo scheme. Castleton could give the team a back-to-the-basket presence. And the 6-foot-7 Osifo has the ability the guard any position on the floor.

White has found sustained success in the transfer market, beginning with Canyon Barry and Justin Leon and continuing with Egor Koulechov, Jalen Hudson and Blackshear.

Partly because of the transfers, the Gators have their smallest freshman class. It includes 6-foot-5 guard Niels Lane and 6-foot-7 forward Samson Ruzhentsev. Both provide the size and speed White looks for to create matchup issues on both ends. Lane is expected to be one of the team's top on-ball defenders, and Ruzhentsev might already be the team's best long-range shooter.

The Gators had UConn scheduled for their Dec. 6 home opener, but the Huskies pulled out to play North Carolina State a day earlier in Connecticut. Teams across the country have moved games to make schedules more regional in hopes of minimizing travel and the potential spread of COVID-19.

Florida scrambled to fill the schedule void with Stetson.