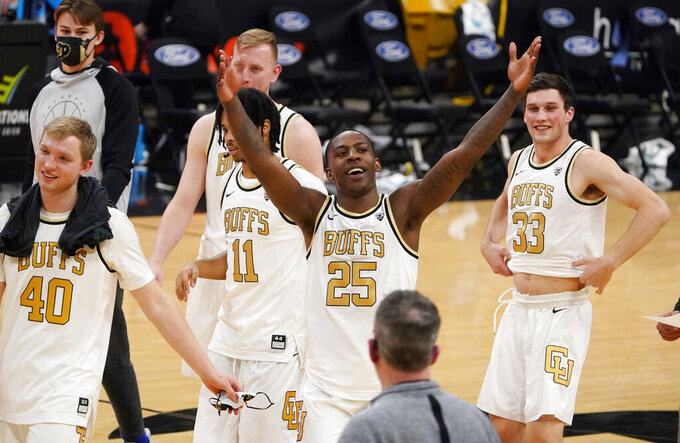 BOULDER, Colo. (AP) — McKinley Wright IV made his way around the court after his final home performance, throwing air high-fives at all the “fans” sitting in the front row.

He deserved a standing ovation. Too bad they were just cardboard cutouts.

The speedy senior point guard scored 17 of his 24 points in the second half and No. 24 Colorado shook off a sluggish start to beat Arizona State 75-61 on Thursday night.

Wright turned in his seventh 20-point game of the season in what was his last game at CU Events Center. He made one acrobatic move after another to help the Buffaloes (20-7, 14-6 Pac-12) bounce back from 10 first-half turnovers.

“I’m hurt this is my last game here,” Wright said. “But I left everything I had out here.”

Wright looked sharp in his white Nike shoes with a gold swoosh. He played sharp, too.

The reigning Pac-12 player of the week also had four assists, four rebounds and one big hug from his coach.

“I told him how much love him and how much I’m going to miss coaching him," Colorado coach Tad Boyle said. “McKinley's going to go down as one of the greatest players in Colorado basketball history.”

There was a hold-your-breath moment for Colorado fans late in the game when Wright stayed down on the floor near the Buffaloes bench during a timeout. The team met on the floor next to him as he stretched out each calf due to cramps.

Jeriah Horne had 12 points and 12 rebounds in a game originally scheduled for Feb. 4, but postponed due to COVID-19 issues within Arizona State's program.

This was the 12th time in program history Colorado has reached the 20-win plateau — and eighth time under Boyle, including three in a row.

“It was a special, special win, on a special night,” Boyle said.

Boyle told his players in a pregame meeting to make the most of their final moment together on this court.

“Obviously, it didn’t inspire them very much the way we played in the first half,” cracked Boyle, whose team led 31-30 at halftime despite all their miscues.

Remy Martin had a rare off night, finishing with six points on 1-of-9 shooting. It snapped a string of eight straight games with 20 or more points. Martin entered the game leading the Pac-12 in scoring with a 21.3-point average.

Tied at 39 with 16:44 remaining, Colorado went on an 8-0 run to gain separation. It was highlighted by an acrobatic layup by Wright on a fast break.

“They really just turned it up in the second half,” Arizona State coach Bobby Hurley said. “We kind of just folded defensively and McKinley Wright had his fingerprints all over that.”

Wright biggest contribution was helping chase around Martin, who rarely had a moment's peace. Wright has flown under the radar playing in the same conference as dynamic players such as Martin.

Arizona State: The Sun Devils were outrebounded by a 44-28 margin. They also were outscored 36-26 in points in the paint. “This one really stung,” Woods said.

Colorado: Picked to finish seventh in the Pac-12 preseason poll, the Buffaloes are currently looking at the No. 3 seed in the conference tournament next week in Las Vegas and will have a first-round bye.

Colorado's 14 conference wins are the most in program history, surpassing the 13-1 mark of the 1961-62 Big Eight Conference championship team.

Arizona State freshman guard Josh Christopher (back) stayed in Tempe for treatment. ... Sun Devils F Marcus Bagley (ankle) played for the first time since Jan. 30. He had no points in 20 minutes. ... .The Buffaloes went 17 of 19 from the free throw line and are now shooting 83.4% for the season.