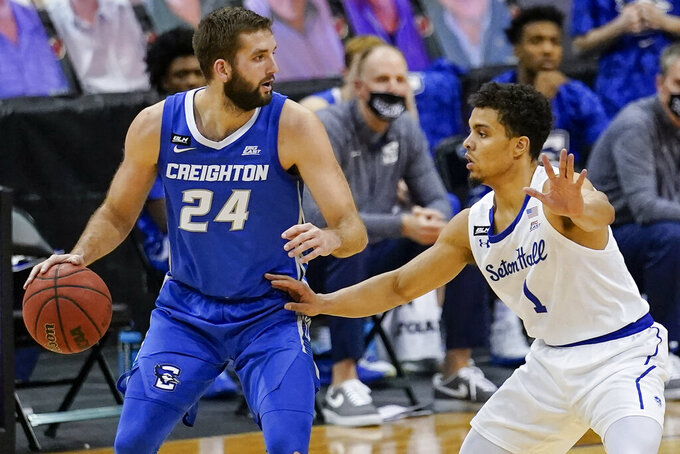 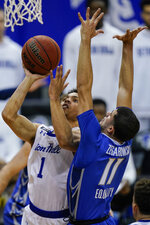 NEWARK, N.J. (AP) — All No. 17 Creighton needed to beat Seton Hall was Mitch Ballock's biggest game of the season and a rarely used or practiced zone defense that allowed the Bluejays to overcome their biggest deficit in a win since 2014.

Ballock hit a go-ahead 3-pointer with 41 seconds to play to cap a season-high 29-point performance and Creighton overcame a 16-point second-half deficit to beat Seton Hall 85-81 on Wednesday night.

“Our guys kept believing,” Creighton coach Greg McDermott said. “When you are in a situation like this the last thing you can do is start doubting one another.”

Graduate transfer Bryce Aiken scored a season-high 21 points and Myles Cale had 18 of his 20 in the first half to lead Seton Hall.

The last time the teams met on Jan. 6, Creighton won 89-53. On this night, it appeared Seton Hall was going to get a measure of revenge after scoring 54 points in the first half to take a 10-point lead.

“The mentality of this team is to keep plugging, keep playing hard,” said guard Marcus Zegarowski, who added 18 points. “They hit some tough shots in the first half and we knew if we just got stops in the second half."

The stops came when McDermott had the team play a zone that Ballock admitted they had not practiced much since installing it in the early fall.

“When you have a team that is mature enough and the majority are upper classmen, you just have to be ready for whatever,” Ballock said. “The coaches put us in a great situation and made adjustments and we stole one, honestly.”

Creighton did not take its first lead in the second half until Zegarowski hit a 3-pointer with 1:07 to go for an 81-79 edge. The Pirates tied the game on a layup by Takal Molson with 51 seconds left, but Ballock nailed his seventh 3-pointer to put the Bluejays ahead for good.

Seton Hall had a chance to tie it with eight seconds to play, but Shavar Reynolds' off-balance 3-pointer was not close.

“This team has played unselfish all year,” Seton Hall coach Kevin Willard said. "I said this at the beginning of the year if we’re going to try to outscore (teams), we’re going to have a hard time doing that. We have to dig in and get late stops. We haven’t been able to do that this year.”

The 54 points were a season high for any half for the Pirates, and the 19-of-29 shooting matched an effort against Penn State earlier this season.

Creighton: After losing two straight, the Bluejays knocked off UConn and rallied to beat Seton Hall. It should keep them in the Top 25, where they have been all season.

Seton Hall: The Pirates have played well lately. They were coming off a two-point loss to No. 3 Villanova last week in a game decided by a loose-ball foul call in the final second. This loss might have been tougher.

For the first time this season, Seton Hall allowed a small group of family members to attend the game. One of them was Mamukelashvili's mother, Marianna Oakley. She flew in from the Republic of Georgia to watch her son play a college game for the first time.

Creighton: At DePaul on Saturday.