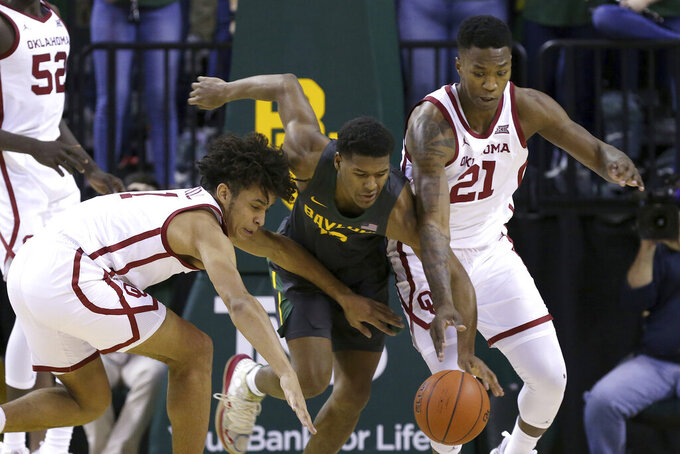 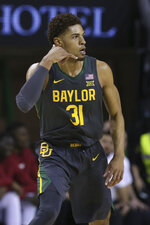 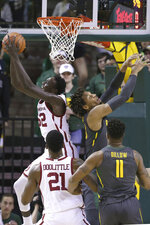 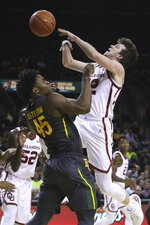 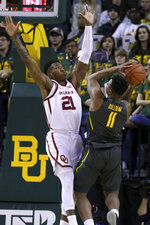 WACO, Texas (AP) — Freddie Gillespie and the Baylor Bears can now say they have been No. 1 during the season.

“Outside of that, guys have bigger goals," Gillespie said. “That's nice, thank God for it, but now just move forward.”

MaCio Teague had 16 points, fellow transfer Davion Mitchell had 13 and Gillespie had a double-double as the Bears won their first-ever home game as the No. 1 team. They held on to beat Oklahoma 61-57 on Monday night, after leapfrogging Gonzaga for the top spot in the new AP Top 25 poll released earlier in the day,

The Sooners, down by 11 early after halftime, pulled to 59-57 on 3-pointers by Brady Manek and Austin Reaves, and had the ball when Kristian Doolittle got a steal against Baylor guard Jared Butler. But Reaves missed a potential go-ahead 3-pointer from the left corner in front of the Oklahoma bench with 6 seconds left.

“I was proud of our guys for fighting and scratching and hanging in there," Oklahoma coach Lon Kruger said. “I can't say we had anything drawn up, it was a steal and it's a break."

The only other time the Bears reached No. 1 was in the poll released Jan. 9, 2017, and they lost by 21 the next night at No. 10 West Virginia. They rebounded with a win at No. 25 Kansas State, but had slipped to No. 6 by time they returned home the following week.

Teague, the junior guard who transferred from UNC Asheville, had a steal and a breakaway layup with just under seven minutes left to stretch the Baylor lead to 53-46. When he missed a 3 on his next shot, Gillespie had a putback slam.

Gillespie finished with 12 points and a career-high 15 rebounds. It was the seventh double-double this season for the 6-foot-9 senior forward who started his career at the NCAA Division III level before walking on at Baylor.

Mitchell scored 10 points with two 3s when Baylor broke a tie and went ahead to stay with a 17-6 run to end the first half. A shot clock-beating jumper was the first of seven points in a row for the former Auburn transfer.

It was the sixth time in eight games Mitchell scored in double figures. He had done so only four times in his first 43 career games, including 34 at Auburn as a freshman in 2017-18. ... New Baylor football coach Dave Aranda got a huge ovation when he came onto the court during a timeout in the first half, about 10 1/2 hours after the start of his introductory news conference. ... The Sooners' last win over a No. 1 team was against Kansas in March 2002. They have lost their last six against No. 1s.

Oklahoma: The Sooners went into the game as the only major conference team with three players averaging more than 15 points — Doolittle, Manek and Reaves. Manek was the only one to get into double figures against Baylor.

Baylor: The Bears had never before won six consecutive Big 12 games in the same season. ... Butler, who was second in the Big 12 with 16.9 points a game, missed his first 10 shots and finished with only four points on 2-of-13 shooting.

Oklahoma is home against Mississippi State on Saturday in the Big 12/SEC Challenge.

Baylor plays its next two games on the road, Saturday night at Florida in the Big 12/SEC Challenge and then Jan. 29 at Iowa State.