Baylor remains No. 1 in AP Top 25 with few changes at top 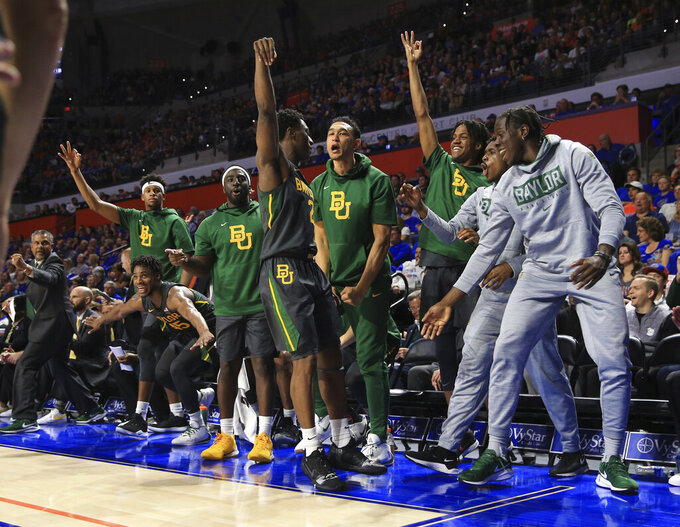 Baylor guard Devonte Bandoo (2) celebrates with teammates on the bench after scoring a three-point basket during the second half of an NCAA college basketball game against Florida, Saturday, Jan. 25, 2020, in Gainesville, Fla. (AP Photo/Matt Stamey)

Baylor is No. 1 for a second straight week in an AP Top 25 poll that had no major changes at the top, a rare bit of stability in a wildly unpredictable season.

The Bears stayed well ahead of No. 2 Gonzaga in Monday's poll, part of an unchanged top seven for the first time this season. In fact, the only change in the top 10 came with Villanova moving up a spot to No. 8 to swap positions with No. 9 Duke. That comes in a season that has seen seven different teams reach No. 1 this season, matching a record set during the 1982-83 season.

Baylor (17-1) hopped over Gonzaga last week to reach No. 1 for the second time in program history, then earned 44 of 64 first-place votes to keep a firm hold on the top spot after beating Oklahoma and Florida last week.

The Zags earned 19 first-place votes to remain either No. 1 or No. 2 in the poll since the middle of December, followed by Kansas, San Diego State — the last unbeaten team in Division I — and Florida State.

No. 22 LSU, No. 23 Wichita State and No. 24 Penn State were the week's new additions, re-entering the poll after appearances earlier this season. Texas Tech, Memphis and Arizona fell out of the rankings.