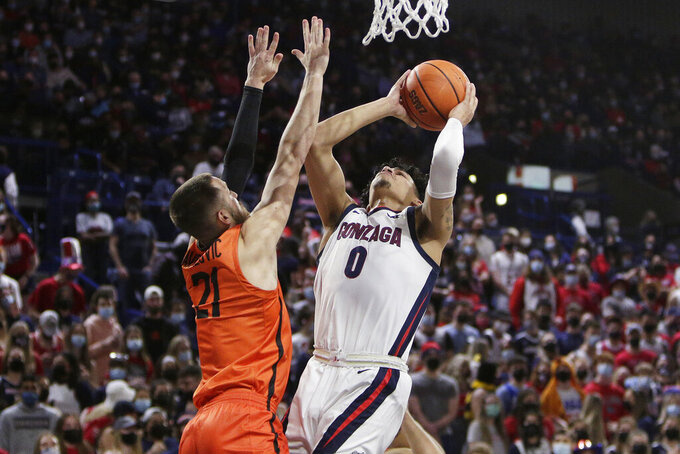 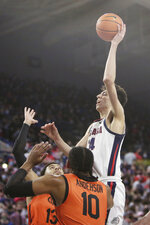 Julian Strawther had 15 points and Chet Holmgren scored 14 for Gonzaga (20-2, 9-0 West Coast Conference), which has won 65 consecutive home games — the longest streak in the nation.

“Rasir was terrific,” Bulldogs coach Mark Few said. “Drew was really active and delivering early. ... We had an intensity about us.”

There was no such performance on this night, as Pacific shot just 31% from the field, including 3 for 21 from 3-point range. The Tigers scored only 23 points in the second half.

Gonzaga jumped out to a 26-10 lead in the first nine minutes behind seven points from Strawther.

Gonzaga led 46-28 at halftime after getting 12 points from Holmgren and 11 from Timme. Pacific was held to 37% shooting in the first half, including 1 of 13 from 3-point range.

Timme has had trouble scoring early in some recent games.

“I finally started to make some shots today and it's about damn time,” he said. “It's great — we win by 30 and everybody scores.”

Pacific missed its first 15 shots after halftime and Gonzaga put together a 16-0 spurt to open a 74-34 bulge.

Anderson scored Pacific's first field goal of the second half with 7:57 left.

“I couldn't be more proud of how my guys played,” Pacific coach Leonard Perry said. “They battled and battled through the entire game.”

Top-ranked Auburn's loss to Arkansas on Tuesday opened the door for Gonzaga to possibly return to No. 1 on Monday.

Former Gonzaga star Jalen Suggs, hero of last year's NCAA Tournament semifinal win over UCLA, attended the game and sat in the raucous student section for some of the first half. Suggs now plays for the Orlando Magic in the NBA.

“It feels so good to be back,” he told reporters.

Few noted that Suggs in his one season at Gonzaga never got to experience a game in front of the noisy fans because of the coronavirus pandemic. “He never had that in his college career,” Few said. “He played in front of empty stands.”

“It was pretty special and pretty cool,” Timme said of Suggs' attendance.

Pacific: The Tigers did not have the firepower to compete with Gonzaga and fell to 1-20 all-time against the Bulldogs.

Gonzaga hosts rival No. 22 Saint Mary's on Saturday in a widely anticipated showdown. “They are always a hard opponent to play,” Timme said. “They come to play and they always pose a big challenge to us.”